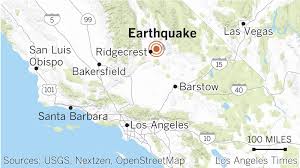 Some people in LA felt furniture shake as the 6.4 magnitude tremor struck.

In the desert city of Ridgecrest near Death Valley National Park, several minor injuries were reported, and the hospital was evacuated:

Thousands Without Power As Storm Hector Batters The Country