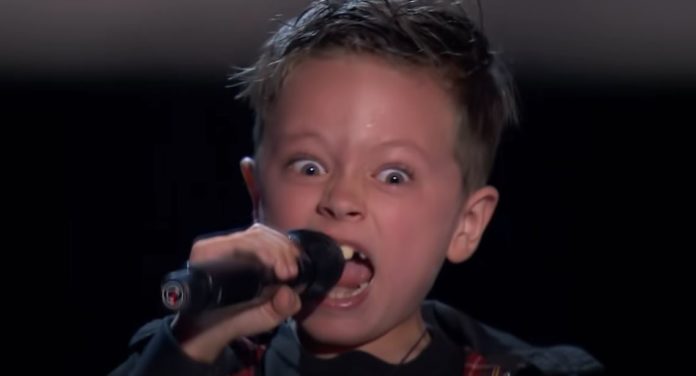 The world of the internet has been taken by storm by 7 year old Jesús del Rio. Del Rio sang AC/DC’s “Highway To Hell” on series 7 of Spanish TV’s La Voz Kid (The Voice Kids).

This performance took place during the Blind Audition Stage of the talent show. This is where contestants perform in front of a live audience. The judging panel of vocal coaches sit in their chairs with their backs to the singer.

The four judges were thrilled with what they heard. Rosario Flores, David Bisbal, Rosario and Melendi instantly spun their chairs around to view the dimunative Bon Scott-alike in person.

Bisbal could not turn around quick enough, desparately slapping his chair which appeared to suffer a technical glitch.

Del Rio ends the performance with this vein-popping scream, leaving him red in the face, as the judges heap the praise on the youngster.

Del Rio advanced to the next round, with Melendi as his vocals coach.

You can check out the performance for yoursleves below.

Back in February, AC/DC’s Angus Young also admitted coming up with the lyrics to “Highway To Hell” whilst having a bathroom break.

The guitarist also paid tribute to his brother and band co-founder Malcolm Young who also contributed to the making of this iconic track.

“And we’d been there a couple of weeks and we were going a bit slow. And then I had come in one day with (late AC/DC co-founder and guitarist Malcolm Young) and just before we got in, I said, ​’I’ve got a good idea in my head”, Young said.

He also added, “And then I said to Malcolm, I had this thing about the drums”.

“I said, ​’I just want it to come in in the right spot.’ And he said, ​’Okay.’ Malcolm got behind the drums and he said, ‘Right, you let me know when you hear the downbeat, the first downbeat of what you want.’ So that’s what I did. I said, ‘I’ll do my drop,’ and he said, ​’And I’ll follow your foot.’ So he came in with the beat. That’s how we set it up”.