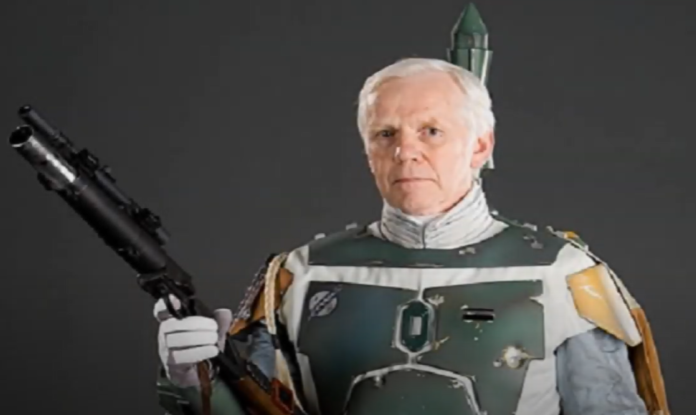 His agent said that Bulloch died in hospital on Thursday, from “health complications following his many years living with Parkinson’s Disease”.

Jeremy Bulloch was known for playing the bounty hunter in Empire Strikes Back in 1980, and Return Of The Jedi 3 years later. His agent said, “We are very sad to announce the death of actor Jeremy Bulloch, earlier today”.

“He died peacefully, in hospital surrounded by his family”.

His agent added, “Jeremy was best known for the role of Boba Fett in the Original Star Wars Trilogy”.

“He had a long and happy career spanning for than 40 years. He was devoted to his wife, 3 sons and 10 grandchildren. They will all miss him terribly. We ask that their privacy be respected at this very difficult time”.

Bulloch was born in Market Harborough, Leicstershire. He also had parts in the James Bond film Octopussy and a number of episodes of Doctor Who in the 1970s.

Some of Bulloch’s colleagues paid tribute to the actor. See more here.

He continued, “A fine actor, delightful company and so kind to everyone lucky enough to meet or work with him”.

“I will deeply miss him and am so grateful to have known him. RIP Dear Jeremy”.

“He will be remembered, not only for his iconic portrayal of the legendary character, but also for his warmth and generous spirit which have become an enduring part of his rich legacy”.

Daniel Logan played a young Boba Fett in Star Wars: Attack of the Clones in 2002. He took to Instagram to pay tribute to Bulloch. “RIP Legend, I’ll never forget all you’ve taught me! I’ll love you forever! Conventions won’t be the same without you. May the force be with you always”.

Transdev Shares Video Of Luas Near Misses In Safety Appeal