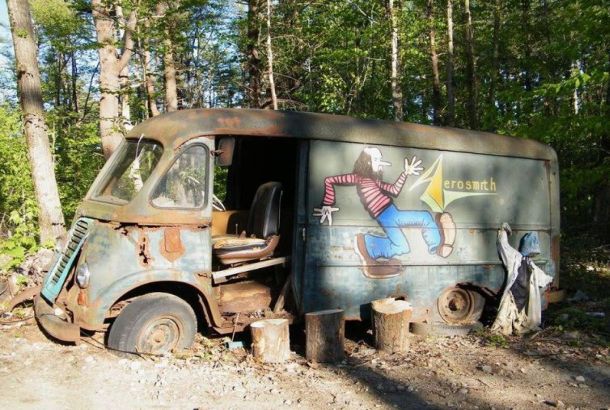 Unstoppable rockers, Aerosmith are set to guest on a new episode of the History channel TV show American Pickers.

Antimusic reports that the group is set to be reunited with their original 1970s touring van. Nova reported last year that the van had been discovered by hosts Mike Wolfe and Frank Fritz.

@Aerosmith Saw @americanpickers Last night discovering this hidden treasure from the Greatest Rock Band ! Really Cool -AMERICAN HISTORY now in the right hands ! Excited to see what the do with it. Hope Aerosmith tell share some stories around it on the follow up. pic.twitter.com/RkTe1F1tUd

The pair made the find in the woods near Chesterfield, MA, about 110 miles west of Boston. The beat up old International Harvester Metro from 1964 belonged to a bloke called Phil.

That guy confirmed that the previous owner had a connection to the rockers and the van was lying idle when he bought the land.

The TV hosts forked out $25,000 for the van and, after a full restoration, fans will see Wolfe and Fritz give it over to the band in Las Vegas.

Aerosmith are currently playing shows as part of their “Deuces Are Wild” residency In Vegas. That’s at the Park Theater at the Park MGM hotel.

American Pickers: “Aerosmith Van” premieres Monday, July 8 at 8pm ET/PT on History. But you can check out a preview video below: