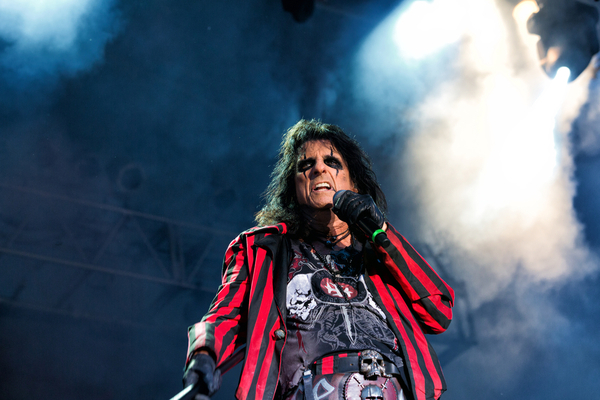 During a recent interview, Alice Cooper has said that he feels that “rock and roll and politics do not belong in the same bed together”.

Speaking with Creative Loafing Tampa Bay, Cooper was also asked about how his relationship with Ted Nugent is “holding up right now”, given what he has said over the last few years.

“Ted and I grew up together in Detroit, and he’s always been the mouth that roared. When he gets going, nobody can stay with him. I kind of look at him as his own entity”, Cooper said.

Alice Cooper was also emphatic about his views on the marriage of music with politics.

“I don’t ever talk politics… I hate politics. I don’t think rock and roll and politics belong in the same bed together, but a lot of people think it does — because we have a voice, and we should use our voice”, he said.

“But again, rock and roll should be anti-political, I think. When my parents started talking about politics, I would turn on THE [ROLLING] STONES as loud as I could. I don’t want to hear politics, and I still feel that way”.

“My music and my show is designed to give you a vacation from CNN, you know what I mean?”, Cooper continued.

“I’m not preaching anything up there, and I’m not knocking anybody. If I do a thing like on ‘Elected’, which we would always do during the elections, and I’d bring out [Donald] Trump and Hillary [Clinton] to fight, and both of them would get wiped out! That’s what was funny about it. If you’re in the political theater, you’d better be able to take a joke. So, that’s okay. I don’t mind the satire of it, but I don’t ever go up there and tell you who to vote for”.

Despite stating in a previous interview that musicians sharing their political views is the “worst idea ever”. Cooper has insisted that he has no issues with music stars who highlight global issues, benefitting others.

He said, “I think what Bono does and what [Bruce] Springsteen does, Sting and all the people that raise money for others — that’s humanitarian, and I’m all for that. But I don’t think that’s political”.

Cooper has also revealed that he is currently working on two hard rock albums. More on this here.

This Weekend Is A Queen Weekend On Radio NOVA