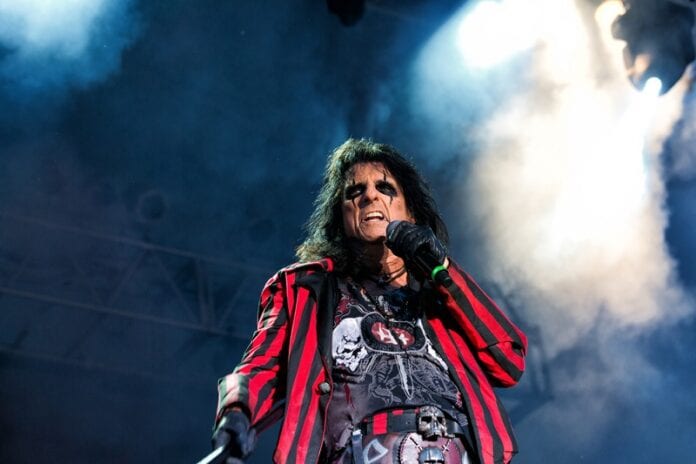 Rock icon Alice Cooper has said the the shock rock routine that propelled him to fame wouldn’t work in today’s climate.

In a new interview with The Independent, Cooper was reflecting on his and his band’s early days in Rock and Roll.

The Alice Cooper band were formed in 1964 and released their first album ‘Pretties For You’ in 1969. Their early shows saw Cooper perform wearing underwear covered in blood over leather trousers, as well as using snakes and guillotines in their sets.

“We gave the audience everything their parents hated. The way we saw it if you’re driving by and you see Disneyland on the left side and a plane wreck on the right, you’re going to look at the plane wreck. We were that plane wreck” said Alice Cooper.

When asked if the routine would work in 2021, Cooper said “You could cut off your arm and eat it on stage and it wouldn’t matter. The audience is shockproof.”

“After not fitting in anywhere in the US (musically or image-wise) Detroit was the only place that recognised the Alice Cooper guitar-driven, hard rock sound and our crazy stage show. Detroit was a haven for the outcasts. And when they found out I was born in East Detroit… we were home”.

Alice Cooper found it hard to find their place in America. “We had that experimental sound, and when you put the theatre on top of it, nobody got it at all” said Cooper

He added “I think we scared the LA audience. They were mostly on acid and Alice Cooper is not what you want to see when you’re on acid.”

On their Detroit roots, Copper explained “it’s an industrial city where they make cars so they’re always around machines that make a lot of noise. And it’s not real sophisticated. That audience wants hard rock.”

Alice Cooper also described at how his introduction of a gender fluid character influenced David Bowie.

“David Bowie brought the Spiders from Mars to see our show in London. He told them, ‘that’s what we need to do.’”

He is also looking forward to the return of live music and has no problem belting out his classic hit ‘I’m Eighteen’.

“When you sing that song in front of an audience, you are 18. The way I look at it, Alice is like Batman or Spiderman. Those characters never age.”

Check out the tracklist for the new album and his newest single ‘Social Debris’ below.

Alice Cooper is set to feature in a new music documentary entitled ‘Rock Camp’. Check out our story on it here.