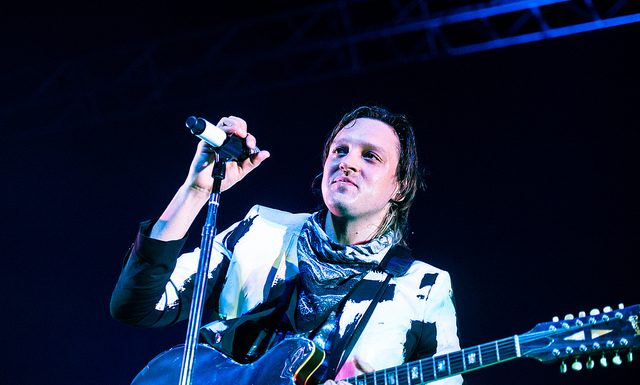 Arcade Fire are returning to Dublin this summer and have announced a huge outdoor show at Malahide Castle, Dublin on June 14th.

Their UK and Ireland tour gives fresh hope to desire for new album by Arcade Fire. They’ve been teasing us mere mortals with rumours of a fifth album to be released this year, following on from their album Reflektor which was released back in 2013.

Long considered one of the greatest live bands around, Arcade fire hail from Montreal, Canada and released their debut album Funeral in 2004.

After a two year hiatus of no new music in January, Arcade Fire released a new single the day before Donald’s Trump inauguration. The song “ I Give You power” features Mavis Staples and all the proceeds of the song goes towards the ACLU.

In a recent interview Win Butler discussed why they released the track when they did. “The song was made to come out now. That’s one of the beautiful things about the times we’re in — you can just put something out. It’s the eve of the inauguration and I think it’s easy to get sucked into sitting on the couch and checking your news feed and watching things on CNN, and we’re just musicians and the only thing we really have to offer is our music,” he said.

For us it’s a feeling of solidarity—to not feel powerless and focus on what we can do as individuals and try to do our part.”

Arcade fire will also be making their Northern Ireland debut at an outdoor show at Ormeau Park, Belfast on June 13.

Tickets for Malahide Castle priced €69.50 inclusive of booking fee go on sale at 9am this Friday, February 17th from Ticketmaster outlets and www.ticketmaster.ie .
But fear not if you find it difficult to secure tickets to the show. We at Nova are here to help. Greg Gaughran is giving away tickets to the show, so tune in all week for a chance to enter the draw on Friday where you and three friends could be in with a chance to win!