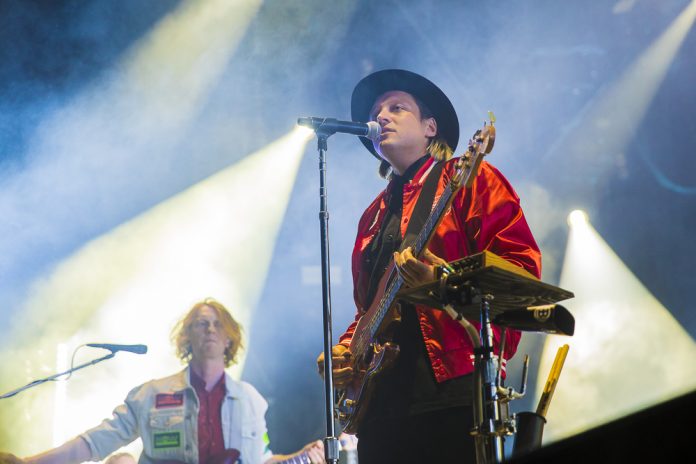 At the 3Arena last Friday, April 6th, Canada’s Arcade Fire treated Irish crowds to an emotional tribute to the late great Dolores O’Riordan. They played a moving rendition of The Cranberries’ breakthrough pop classic ‘Linger’. You can watch the mini medley below.

Win Butler sang a few bars of the 1993 hit before switching the melody into their song ‘Everything Now‘. You can hear the Arcade Fire frontman gently harmonise with the crowd.

Dolores O’Riordan passed away suddenly in January at the age of 46. An audio of her last phone call that she made before her passing has since emerged. In the call, the singer was enthusing over a cover version the song ‘Zombie‘ by the band Bad Wolves. Dolores was due into the studio only hours later to lay down a guest vocal on the track.

In support of their 2017 album Everything Now, Arcade Fire are presently on their ‘Infinite Content’ tour. The Canadian band are now in the UK after the Irish date in Dublin. They have announced plans to extend the run into July in America.

Last night, Butler surprised fans in Manchester after their show at the Manchester Arena. The singer turned up at the famous club The Deaf Institute with a macbook and a bottle of whisky in hand where he dejayed for two hours. Dancers at the ‘Girls on film’ club night were treated to tunes from The Rapture, Barry White, MIA, Can, Sylvester, Human League, Donna Summer, and Blondie.

About last night… lead singer of @arcadefire, Win Butler @djwindows98 does an impromptu set at my clubnight @GIRLSONFILM80 @deafinstitute for us 🕺🏼💃🏻 pic.twitter.com/Y5nK4zSgUP