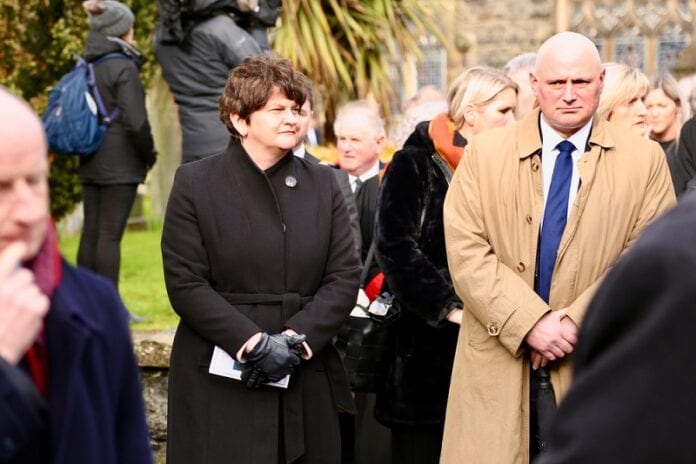 Arlene Foster has suggested that the UK should give Ireland its surplus of vaccines.

Northern Ireland’s first minister was speaking to RTÉ over the weekend and she is alarmed at the difference in vaccinations between the two jurdistications.

At least 40% of the adult population in Northern Ireland have received their first dose of the vaccine, as Ireland lags behind.

Foster has blamed the difference between the two countries on the “inflexibility of the EU.”

She has suggested that Boris Johnson and Taoiseach Micheál Martin should have a conversation about Ireland getting the UK’s surplus as it would be in the best interest of all countries to be vaccinated as quickly as possible.

Arlene Foster said “there will have to be conversations about how we move forward in this.”

“Obviously we will be taking advice from our chief medical officer (Dr Michael McBride) as to what are the best ways forward, but it is my desire of course, as a neighbour, to see everyone vaccinated on the island of Ireland and I very hope much that the vaccine programme in the Republic does pick up pace because it’s important that if people are coming and travelling across the border that they are vaccinated, but also for the population of the Republic as well.”

Mrs Foster also said that Dr McBride has made it clear that if a lot people travel to Northern Ireland who are not vaccinated, it “could have an impact on the efficacy” of the vaccine on those who have received it.

Arlene Foster has said Stormont has taken a sensible approach to people crossing the border.

“That’s something we haven’t done unlike the Republic, we have never had that rule, we have tried to say to people to be sensible and not move between different jurisdictions during the different lockdowns.”

She went on to add “but I think we want to take advice from our medical experts on all of these issues.”

Ireland has now passed the half a million mark in its vaccine rollout.

The latest figures from Ireland’s Covid-19 Data Hub show that a total of 513,322 vaccines have been administered.

These include 363,601 first doses of the vaccine while 149,721 people have received their second jab.

Pedestrian Killed In Hit And Run In Roscommon