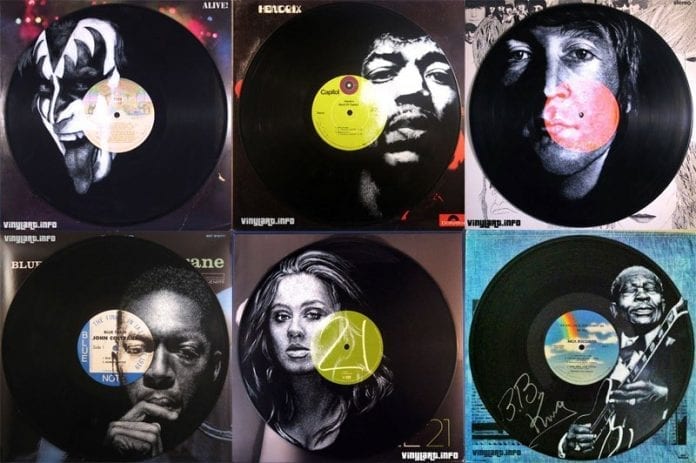 An American artist is testing the boundaries of what can be used as a blank canvas, David Edlen is using vinyl records to paint portraits of famous musicians.

The artist isn’t just randomly destroying precious vinyl records, he is an avid fan and collector, who truly respects the craft.

Edlen mostly paints on unusable records, painting artists such as David Bowie, Aretha Franklin, Johnny Cash, Bob Dylan, Beck and Jimi Hendrix, on the front of their very own LPs.

His style is very much like a Monet painting, carefully dotting white paint onto the surface of the vinyl until he creates a face.

The Huffington Post asked Edlen how he got started. “As a teenager with a lot of time and records, I combined my love of music with a couple high school art projects. Somehow, while listening to the Beatles’ Revolver, it all came together in my head.”

He spoke about his favourite paintings: “We were fortunate enough to see The Verve reunite live at The Roundhouse in London a few years back. Painting the four members of the group on the double album they released following the tour was a favorite.”

David was asked is there any vinyl you wouldn’t paint on? “As a record collector first, I try to paint on unplayable records, or reissued releases that aren’t collectible, or people’s own collected copy. I would refuse to paint on the copy of original pressing of The Beatles’ Revolver that belonged to my dad, because that copy, with its ticks and pops, means more to me than anything I could create with it.

Watch the Bowie timelapse video below.