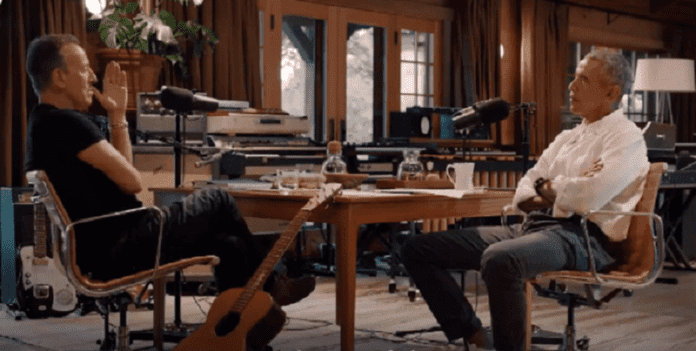 In the latest episode of their podcast called ‘Renegades‘, Barack Obama and Bruce Springsteen discuss their early musical influences.

The new episode, entitled ‘Amazing Grace: American Music’ was released today and we hear the 44th President chat to the Boss about the music that inspired him as a young child in Hawaii.

“The first album I bought with my own money (was) ‘Talking Book’, Stevie Wonder. I would sit with a banged-up old turntable – a kind of plastic-y looking turntable – I got myself some earphones so my grandparents would not complain, and I would sing along to every Stevie Wonder song for hours” said Obama.

The former president also recalled listening to the top 40 on the radio presented by Casey Kasem. He admitted that he got “really attached” to songs he heard on on the programme.

Barack Obama and Bruce Springsteen then reminisce about Marvin Gaye and Billy Paul and that led to the pair singing Paul’s hit ‘Me And Mrs Jones’.

Joni Mitchell was another artist recognised by Obama and Springsteen, which again, led to the two singing together. You can hear the clip here.

The podcast was recorded last year in one session and is available to listen to on Spotify.

The pair have formed a friendship over the years, as Springsteen is a democrat and has campaigned for Obama, Hillary Clinton and President Joe Biden.

In a trailer that was released on the day the new series was announced, Obama said:

“On the surface, Bruce and I don’t have a lot in common. He’s a white guy from a small town in Jersey. I’m a black guy of mixed race, born in Hawaii. He’s a rock ‘n’ roll icon. I’m… not as cool.”

“Over the course of a few days, all just a few miles from where he grew up, we talked. What we discovered in these conversations is that we still share a fundamental belief in the American ideal. Not as an act of nostalgia, but as a compass.”