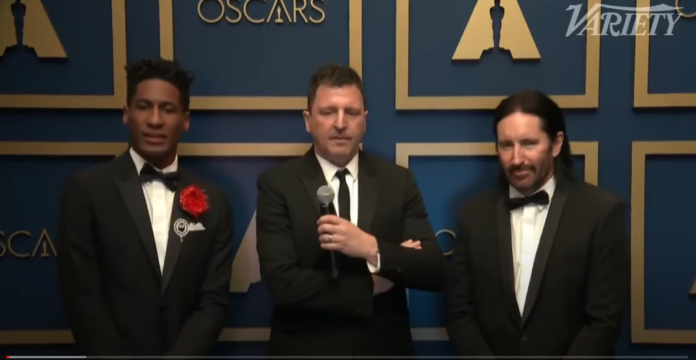 The music for the Disney hit “Soul”, has earned Atticus Ross, Jon Batiste and Trent Reznor an Academy Award for 2021.

The track won the award for “Music: Orginal Score”. It got the nod for the award ahead of “Da 5 Bloods”, “Minari”, “New of the World” as well as “Mank” another Reznor/Ross creation.

Jon Batiste is the musical director for the “The Late Show with Steve Colbert”, while Trent Reznor and Atticus Ross are from the band Nine Inch Nails, with Reznor as frontman for the band.

Atticus Ross also composed music for “The Social Network”, “Gone Girl”, “The Girl With The Dragon Tattoo” and “Bird Box”.

“God gave us 12 notes,” Batiste said at his acceptence speech. “It’s the same 12 notes Duke Ellington had, Bach had, Nina Simon. Every gift is special”.

“Every contribution with music that comes from the divine, into the instruments, into the film, into the minds and hearts and souls of every person who hears it. The stories that happen when you listen to it, the stories you share, the moments you create, the memories you make, man, it’s just so incredibly special”.

For a full rundown on the Oscar winners, check out our man at the movies Clint Drieberg’s full report right here on Nova!

Four Episodes Of “30 Rock” In Which Characters Appear In Blackface...