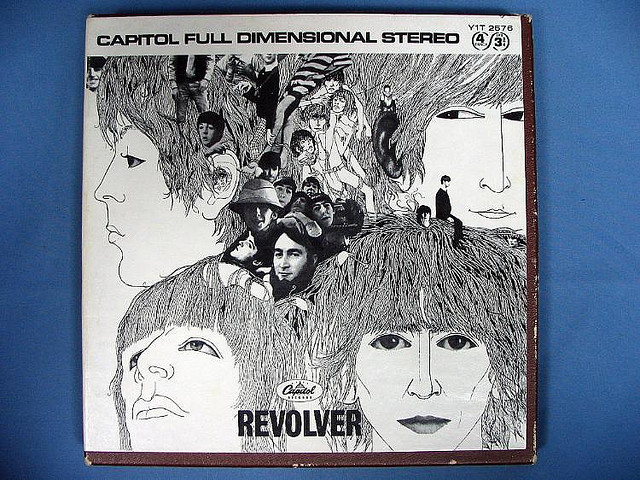 Revolver is the seventh studio album by The Beatles and it was released In August 1966. It saw the band begin to experiment with their sound which followed onto to their next album Sgt. Pepper’s Lonely Hearts Club Band.

All the rules fell by the wayside with Revolver, as The Beatles began exploring new sonic territory, lyrical subjects, and styles of composition. It wasn’t just Lennon and McCartney, either — Harrison staked out his own dark territory with the tightly wound, cynical rocker ‘Taxman’; the jaunty yet dissonant ‘I Want to Tell You’; and ‘Love You To’, George’s first and best foray into Indian music.

Such explorations were bold, yet they were eclipsed by Lennon’s trippy kaleidoscopes of sound. His most straightforward number was ‘Doctor Robert’,  an ode to his dealer, and things just got stranger from there as he buried ‘And Your Bird Can Sing’ in a maze of multi-tracked guitars, gave Ringo a charmingly hallucinogenic slice of childhood whimsy in ‘Yellow Submarine’.

Then he capped it off with a triptych of bad trips: the spiraling ‘She Said She Said’; the crawling, druggy ‘I’m Only Sleeping’; and ‘Tomorrow Never Knows’,  a pure nightmare where John sang portions of the Tibetan Book of the Dead into a suspended microphone over Ringo’s thundering, menacing drumbeats and layers of overdubbed, phased guitars and tape loops.

McCartney’s experiments were formal, as he tried on every pop style from chamber pop to soul, and when placed alongside Lennon’s and Harrison’s outright experimentations, McCartney’s songcraft becomes all the more impressive. The biggest miracle of Revolver may be that the Beatles covered so much new stylistic ground and executed it perfectly on one record, or it may be that all of it holds together perfectly.

Either way, its daring sonic adventures and consistently stunning songcraft set the standard for what pop/rock could achieve. Even after Sgt.Pepper, Revolver stands as the ultimate modern pop album and it’s still as emulated as it was upon its original release.

9. And Your Bird Can Sing