Home Classic Albums You Can Listen to The Beatles’ ‘Sgt Pepper’ In Full From Midnight... 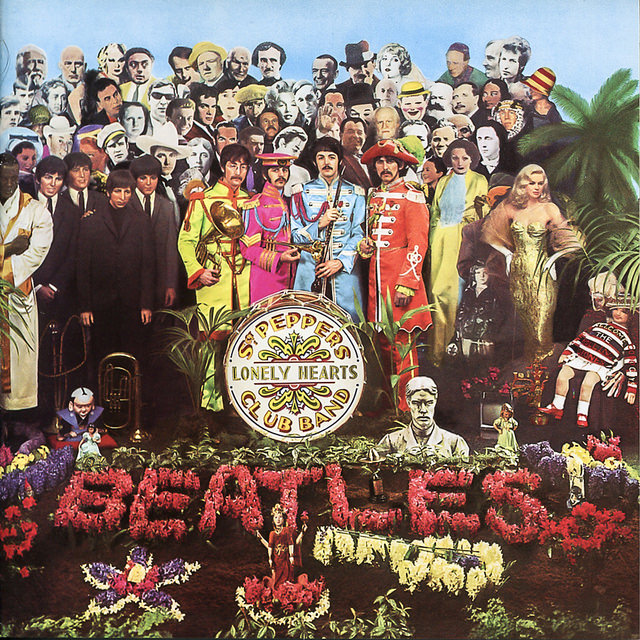 The Beatles’ Sgt. Pepper’s Lonely Hearts Club Band  is the English rocker’s eighth studio album. Released in June 1967, the album included songs such as “With a Little Help from My Friends”, “Lucy in the Sky with Diamonds”, and “A Day in the Life”. Continuing the artistic maturation seen on the band’s album Revolver (1966), Sgt. Pepper further departed from the conventional pop rock idiom of the time and incorporated balladry, psychedelic, music hall, and symphonic influences.

During the Sgt. Pepper sessions, the group improved upon the quality of their music’s production while exploring experimental recording techniques. Producer George Martin’s innovative approach included the use of an orchestra. Widely acclaimed and imitated, the album cover, designed by English pop artists Peter Blake and Jann Haworth, was inspired by a sketch by Paul McCartney that depicted the band posing in front of a collage of some of their favourite celebrities.

Sgt. Pepper was a worldwide critical and commercial success, spending 27 weeks at the top of the UK Album Chart and 15 weeks at number one on the US Billboard 200. A seminal work in the emerging psychedelic rock style, the album was critically acclaimed upon release and won four Grammy Awards in 1968. With an estimated 32 million copies sold, it is one of the world’s best selling albums. Sgt. Pepper is considered by many to be the most influential and famous rock album ever, and has been named the greatest album of all time by both All Time Top 1000 Albums and Rolling Stone.

By late 1965, the Beatles had grown weary of touring, and by the end of their 1966 US tour they decided to retire from live performance. Lennon commented: “We’re fed up with making soft music for soft people, and we’re fed up with playing for them too.” Upon their return to England, rumours began to circulate that the band had decided to break up. They subsequently took an almost two-month vacation and individually became involved in their own interests. George Harrison travelled to India for six weeks to develop his sitar playing at the instruction of Ravi Shankar. In 1966, McCartney and producer George Martin collaborated on a soundtrack for the film The Family Way. Also in 1966, John Lennon acted in How I Won the War, and he attended art showings, such as one at the Indica Gallery where he met his future wife Yoko Ono. Ringo Starr used the break to spend more time with his wife and first child. In November, during a return flight to London from Kenya, where he had been on holiday with tour manager Mal Evans, McCartney had the creative idea that would first become a song, and would eventually inspire the Sgt Pepper’s Lonely Heart’s Club Band concept.McCartney commented: “We did try performing some songs off Revolver, but there were so many complicated overdubs we can’t do them justice. Now we can record anything we want, and it won’t matter. And what we want is to raise the bar a notch, to make our best album ever.”

Concerns that lyrics in Sgt. Pepper referred to recreational drug use led to several songs from the album being banned by the BBC. The album’s closing track, “A Day in the Life”, includes the phrase “I’d love to turn you on”. The BBC banned the song from airplay on the basis of this line, claiming it could “encourage a permissive attitude toward drug-taking”. Both Lennon and McCartney denied any drug-related interpretation of the song at the time, although McCartney’s later comments in The Beatles Anthology documentary regarding the writing of the lyric make it clear that the drug reference was indeed deliberate.

“Lucy in the Sky with Diamonds” also became the subject of speculation regarding its meaning, as many believed that the words of the chorus were code for LSD. The BBC used this as their basis for banning the song from British radio. Again, Lennon consistently denied this interpretation of the song, maintaining that the song describes a surreal dreamscape inspired by a picture drawn by his son Julian.

Upon its release on 1 June 1967, Sgt. Pepper received critical acclaim.Various reviews appearing in the mainstream press and trade publications throughout June 1967, immediately after the album’s release, were generally positive. In The Times, prominent critic Kenneth Tynan described Sgt. Pepper as “a decisive moment in the history of Western civilisation”. Richard Poirier wrote “listening to the Sgt. Pepper album one thinks not simply of the history of popular music but the history of this century.”

In a negative review, Richard Goldstein of The New York Times found the album “spoiled” and felt that it “reek[ed]” of “special effects, dazzling but ultimately fraudulent”. After he was criticized for his review. Goldstein published a response a month later, in which he said that he was worried “as a critic” that the album was not on-par with the best of the Beatles’ previous work, despite being “better than 80 per cent of the music around today”. He called it an “in-between experience, a chic”, and felt that when the novelty of its production tricks wears off, “and the compositions are stripped to their musical and lyrical essentials, Sergeant Pepper will be Beatles baroque—an elaboration without improvement”.Robert Christgau of The Village Voice wrote in an article at the time that the album is “a consolidation, more intricate than Revolver but not more substantial. Part of Goldstein’s mistake, I think, has been to allow all the filters and reverbs and orchestral effects and overdubs to deafen him to the stuff underneath, which was pretty nice, and to fall victim to overanticipation.” He called the album “a dozen good songs and true” in a 1977 retrospective review for Creem, and stated, “Perhaps they’re too precisely performed, but I’m not going to complain.”

In his Encyclopedia of Popular Music, Colin Larkin wrote that the album “turned out to be no mere pop album but a cultural icon embracing the constituent elements of the 60s’ youth culture: pop art, garish fashion, drugs, instant mysticism and freedom from parental control.” In a 1987 review for Q, Charles Shaar Murray commented that the album “remains a central pillar of the mythology and iconography of the late ’60s.” Anthony DeCurtis of Rolling Stone argued that it “revolutionized rock & roll” and that its “immensely pleasurable trip has earned Sgt. Pepper its place as the best record of the past twenty years.” DeCurtis found it to be “not only the Beatles’ most artistically ambitious album but their funniest” and cited its “fun-loving experimentalism” as the album’s “best legacy for our time.” By contrast, Robert Christgau said that, “although Sgt. Pepper is thought of as the most influential of all rock masterpieces, it is really only the most famous. In retrospect it seems peculiarly apollonian—precise, controlled, even stiff—and it is clearly peripheral to the rock mainstream”, and asserted that “the ‘concept album’ idea was embodied more fruitfully—and earlier in Rubber Soul.” Mark Kemp of Paste wrote similarly, “for all its sonic richness, Sgt. Pepper remains one of rock’s most overrated albums—its songwriting isn’t nearly as consistent as Revolver‘s, and its storyline is abandoned after the first two tracks and artificially reprised near the end.”

Sgt. Pepper was the first Beatles album to be released with identical track listings in the UK and the US. The American release did not originally contain the side two runout groove and inner groove sound effects that were restored for the worldwide CD issue, released on 1 June 1987.

All songs written and composed by Lennon–McCartney except where noted.

You Can Listen To The Eagles’ ‘Hotel California’ In Full Tonight...