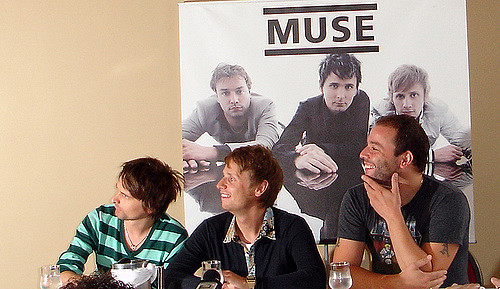 Muse were awarded the biggest prize of the night at last night’s Q Awards when they took home the title of ‘Best Act In The World Today.’

The awards show was held in London last night, with guests including Johnny Marr, Meat Loaf and Debbie Harry.

Muse were the big winners of the night. The band beat Coldplay, U2, Biffy Clyro and The 1975 to the top prize when they were awarded ‘Best Act In The World Today’. In their acceptance speech, frontman Matt Bellamy said “Thank you; we are the best act in the world today. We don’t deserve it; let’s be honest. Shout out to U2 – we owe so much to them. We toured with them in 2009 and learned so much from them.” The band’s drummer, Dominic Howard added “I agree with Matt. It’s a ridiculous title but we’ll take it. As with all these things, we’re accepting that on behalf of our fans. Thank you.”

Muse may have beaten U2 to the ‘Best Act In The World’ title, but the Irish band were still big winners on the night. U2 took home the prize for ‘Best Live Act’, while Meatloaf was given the Hero Award for his contribution to music. When collecting the award, the ‘Bat Out Of Hell’ musician told the audience “You brought tears to my eyes – thank you very much,”  he continued,“I know we all have heroes but a hero is somebody who does something good for everybody every day.”

He added “Whether it’s to open a door for somebody, whether it’s saying thank you or you’re welcome, to help the less fortunate, to do whatever you can to bring love back into this world. Because we need it folks, we need it.”