Home Music Black Sabbath To Be Honoured By Birmingham With Bridge And ‘Metal Bench’! 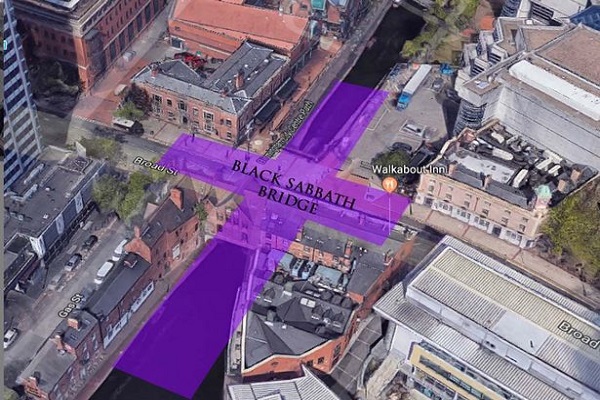 Black Sabbath are due to be honoured by the city of Birmingham with a metal bench! The legendary metallers formed in the Aston area of their Birmingham hometown back in 1968.

Black Sabbath called it a day with a farewell tour last year and their Brummie home city is planning to mark to the band’s contribution to music by calling a bridge after them and placing a commemorative ‘metal bench’ which will feature effigies of the band members.

The Birmingham Mail reports that plans are already underway to build the handmade, stainless steel bench in the Jewellery Quarter of the city. According to the NME, the bench will feature images of Ozzy Osbourne, Tommy Iommi, Geezer Butler as well as founding member and drummer Bill Ward, with the words “Geezer. Ozzy. Tony. Bill. Made in Birmingham 1968.” inscribed on to it.

As well as the metal bench, there are also intentions to rename a bridge on Broad Street in the city centre ‘Black Sabbath Bridge’. Drummer Bill Ward will also receive his own star on the city’s Walk of Stars, that celebrates famous people from Birmingham. The newspaper states that, after both awards are given out all five members will have attained a star. The city would then be able to realign all the band members’ stars in the shape of a cross. That would be done in front of the bench.

The bench will reportedly sit on the newly-named ‘Black Sabbath Bridge’, which runs over the canal and is situated next to the Symphony Hall. The scheme has been developed by Egyptian-born, Dubai-based Black Sabbath fan Mohammed Osama, who approached Westside BID on Broad Street with the idea. Mohammed told BirminghamLive,

“My vision is to reunite the four original members for the unveiling of the stars and ‘Metal Bench’,”. “I mean just reunite them together at their hometown, no gigs or anything. Just the four of them being celebrated together at their hometown would be the best ending and closure I could possibly think of. For them on a personal level and for their fans all around the globe.”

“The ‘Metal Bench’ aims to be a major tribute to the band and at the same time, create a major tourist landmark on Broad Street!”