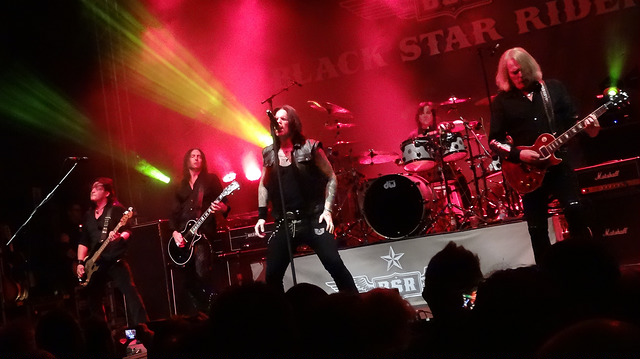 Black Star Riders have announced that they will be touring the UK and Ireland next year.

The tour will follow the band’s new album, ‘Heavy Fire’, which is due for release in early 2017. The album is currently being recorded with producer, Nick Raskulinecz and is the follow up to ‘The Killer Instinct’, which was released in 2015. Speaking about producer Raskulinecz, guitarist Scott Gorham said  “It‘s great to be back with Nick. After such a great job on The Killer Instinct it was a no-brainer to continue the relationship. This album is going to blow everyone away.”

The album and tour will mark the band’s return to music after taking a full year off. Frontman, Ricky Warwick said “Our third album will be out just prior to the dates – it’s going to be great to play tracks from that along with favourites from the first two records also. Having my old friends from Backyard Babies, Gun and The Amorettes out with us too is just icing on the cake.”

The Black Star Riders will play Dublin’s Academy on the 4th of March 2017, with support from  Gun and the Amorettes. Tickets go on general sale at 10am on September 16.