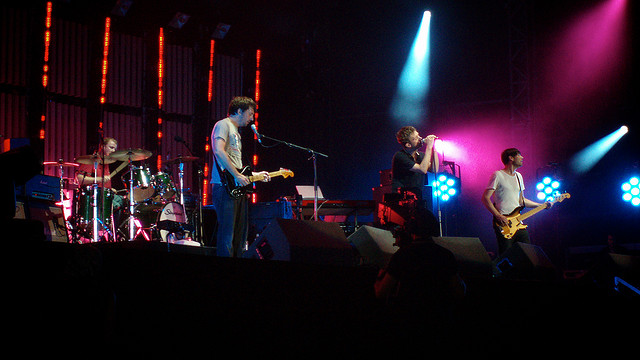 Blur’s drummer Dave Rowntree has been giving his thoughts on the band’s new upcoming album.

The announcement of The Magic Whip last week (Thursday 19th), was certainly a big surprise for all die-hard Blur fans.

The drummer had his doubts about how long they could keep it a secret: “You can’t keep a secret for more than five minutes in the digital age. But there you are. I was completely wrong.”

“It’s great when you finish something like this and you get to unleash it on the unsuspecting public,” Rowntree said.

Speaking to the Guardian about the LP, Rowntree said: “If the music is good everything else follows quite naturally from it. We were all concerned that if we came back with something substandard … it had to be very confident and [we needed to] think it was one of the best things, if not the best thing we’ve done. Otherwise there’s no point. There’s no point in coming back with a mediocre album after all this time.”

Dave’s favourite track on the LP is: “Pyongyang. It’s really beautiful. It’s very hard especially at this stage to have a top-10 list of things. It’s still very fresh.”

Speaking about the recording process, the drummer said: “Yeah, we did five days in Hong Kong and that all seemed to go very well. But it wasn’t until Graham picked up the ball and ran with it and got Stephen Street involved. They did some editing and production work on it and then sent around the initial tracks to everybody to show us what we’d done and we all realised we’d done something quite special.”

“It was very hard at the time while you’re in the midsts of recording to know what you’ve actually done. There were 18 months or so that allowed us to have a bit of perspective on it and allowed Graham and Stephen to do that work and then play it to us. That was the time everyone got very excited about it, and we realised we were actually a lot closer to it than we thought. It’s actually going to be really good.”

The Magic Whip was recorded in Hong Kong and features twelve new tracks, it’s expected to be released in Ireland on April 24th 2015.

Listen to the first preview track ‘Go Out’ here.