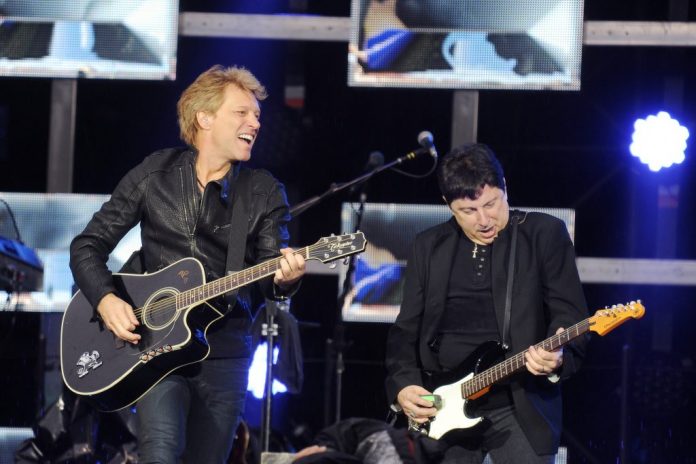 Bon Jovi will reunite with original line-up including Richie Sambora and Alec John Such, to perform at their Rock and Roll Hall of Fame Induction Ceremony in April. The ceremony is set to take place on April 14th, where the band will perform ‘a couple of songs’.

The 33rd annual Rock and Roll Hall of Fame ceremony will be held on April 14, 2018 at Public Auditorium in Cleveland, Ohio.

Bassist Alec John Such departed the band in 1993, while guitarist Richie Sambora left in 2013. But they are both set to rejoin former bandmates Jon Bon Jovi, drummer Tico Torres and keyboardist David Bryan on stage once more for the gig.
Bon Jovi originally formed in 1983 and released 13 studio albums. The band are currently on tour supporting their 2016 album ‘This House Is Not For Sale’.

This House Is Not For Sale featuring our two new songs, "When We Were US" and "Walls" is now available! #THINFShttps://t.co/KScxJnjTdF pic.twitter.com/zIrdaHqN1o

Speaking to Billboard, drummer Torres said: ‘Speaking to Alec on the phone, it was wonderful. We took that journey together at certain times as a group, and I think it’s wonderful we can re-enact that — not only for us, but for the fans. I think when you get together with old friends, there’s always going to be some deep emotions within that.’

Bon Jovi have recently released new music to accompany their latest tour. Keyboardist David Bryan recently said that new track ‘When We Were Us’ was inspired by their Hall Of Fame induction.

Our video for #WhenWeWereUS drops tomorrow and we’re premiering it on @TIDAL! Make sure you’re able to watch by securing your free 60-day trial on https://t.co/kpc0YV6p0w pic.twitter.com/aCR6jvIvyz

In December, Jon Bon Jovi responded to the news of their induction and said the band were: ‘really pleased, obviously, relieved, humbled.’