Home Music Bono & The Edge Team Up With Martin Garrix For Euro 2020... 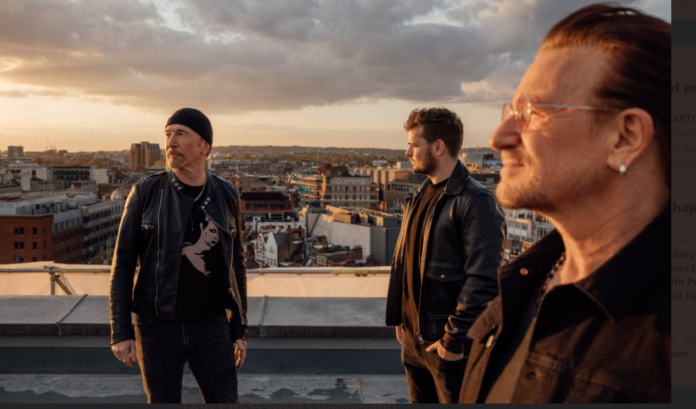 U2’s Bono and The Edge have joined forces with DJ Martin Garrix to release the official track for Euro 2020. You can check it out below.

The track is called “We Are The People” and will arrive on June 11. The tournament will take place this Summer, having been rescheduled from last year due to the pandemic.

“Creating the music for one of the biggest sports events in the world together with Bono and The Edge has been an incredible experience”, Garrix said. “I’m very proud of what we did together and excited to finally share it with the world!”.

Garrix had begun working on the track before the pandemic struck. It was while listening to a demo version of it that the DJ felt it had a guitar vibe. He thought that a collaboration with the U2 rockers would be perfect for it. But, he thought it was just a pipe dream.

“And then my manager was like, ‘Well, you can always try to reach out to U2,’”, Garrix said. “If you never reach out, you always have a no”.

Garrix then sent Bono an email, and received a phone call from the singer a few hours later. “I remember I had to mute myself on the phone during the conversation just to scream and then unmute and play it cool”, Garrix said.  “It was incredible”.

The trio recorded the song in Monaco. An experience which Garrix admitted, he will never forget.

“I had goosebumps in the studio the entire time”, the DJ admitted. “Because it’s Bono standing next to me singing the song”.

The DJ also shared a link on his Twitter account where you can save the track on Spotify. See here.

Back in March, Bono launched a new series to encourage people to take the Covid-19 vaccine when offered. The series is called “Pandemica”. More on that here.

Singer Imelda May also praised the U2 singer for his help when she was recording her recent album “11 Past The Hour”. More on that story here.

“Long wait is almost over”

UEFA marketing director Guy Laurent-Epstein is understanably thrilled that the tournament will go ahead this Summer , having been postponed last year.

“The long wait is almost over, and we are delighted to officially unveil the official song for UEFA Euro 2020, ‘We Are The People’, which features some of the world’s most celebrated artists in Martin Garrix, Bono, and The Edge”, Laurent-Epstein said in a statement.

“Football and music have the power of bringing people together. They are vectors of passion and emotion and combining them will extend further the fan celebration of the tournament, as well as reaching out to new audiences”, he continued.

“With the star-studded line-up we have pulled together to create the tournament’s official music, we are confident of doing just this”.

Euro 2020 is set to kick off when Turkey face Italy in the Stadio Olimpico in Rome on June 11.

Songs About The Queen See Huge Increase In Streaming Figures