Home Entertainment Watch As Borat Lends His Support To Trump For US Midterm Elections! 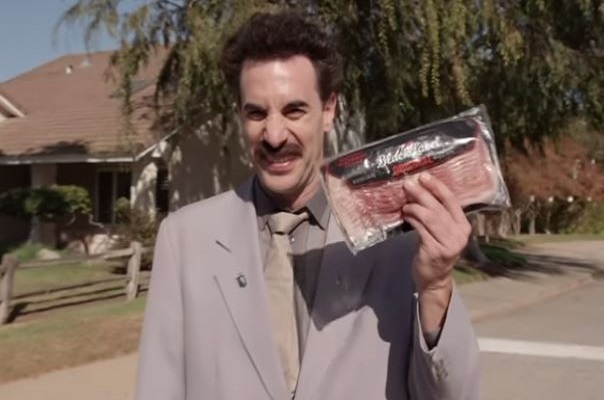 Borat Sagdiyev wishes only the best for the people of the US. In fact, it seems that the Kazakh born ‘journalist’ shares the same political aspirations as the country’s beloved supreme leader, Donald Trump. Both men desire to make America great again.

According to CoS, the infamous reporter from Kazakhstan had a productive time during the American midterms as he canvassed on behalf of the pro-Trumpian congressional candidates.

In a purely altruistic spirit, Borat made his intentions clear,

“Russia interfere with the presidential election. But now, all eyes are on them. So, it’s up to Kazakhstan to swing the midterms for Premier Trump. I come to California to do election tampering.”

Borat spoke to several MAGA supporters, in particular, one of them who approved of Trump’s policy to detain Mexican children in cages, “It was like a campout — he fed them three times a day like his own children because he’s a humanitarian.” Another voter shrewdly observed why Trump isn’t a racist: “In my opinion, the fake news people say he is a racist and I don’t believe he is and I don’t see any evidence of that.” Finding a common bond in the person’s words, Borat responded, “I’m racist — it’s nice.”

Borat was also quite proactive in his canvassing as he paid a visit to a polling station and did his utmost to stop Jewish voters from casting their ballot. Before throwing bacon at attending voters, Borat explained the reasons for his actions, “Big problem, 72% percent of Jew vote for Democrat,”

The clip aired on Jimmy Kimmel Live, which also has an interview with Sacha Baron Cohen. Check it out below.