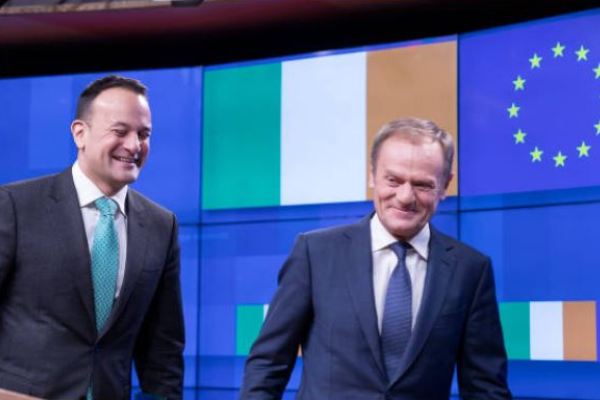 The European Union will make no new offer on Brexit and those who promoted Britain’s exit without any understanding of how to deliver it deserve a “special place in hell” according to EU Council President Donald Tusk.

Rebuffing Prime Minister Theresa May’s bid to renegotiate just a day before she is due in Brussels, Tusk said he had abandoned hope that Brexit might be stopped and said his priority was now to avert a “fiasco” when the UK leaves.

Tusk said at a joint news conference with Taoiseach Leo Varadkar. “I’ve been wondering what that special place in hell looks like, for those who promoted Brexit, without even a sketch of a plan how to carry it out safely,”

The remark has angered Brexit supporters in Britain. Veteran Brexiteer Nigel Farage retorted: “After Brexit we will be free of unelected, arrogant bullies like you – sounds like heaven to me.”

While Tusk was clear the EU would not reopen the divorce deal, he also said he still believed that a common Brexit solution was possible.

Leo Varadkar said the divorce deal, which was rejected by the UK parliament, was “the best possible”.

He said Britain’s political instability further proved the need for a “backstop” insurance policy – the main obstacle to a deal – to keep the border between Ireland and UK-ruled Northern Ireland open after Brexit.

In a stark indication of the stakes for the United Kingdom of a disorderly Brexit, Irish nationalists warned May to her face on Wednesday that if she allowed a no-deal Brexit then there would have to be a referendum on Irish unity.

“In the event of a crash… she must as a democrat return to the Good Friday Agreement and she must begin preparation for a referendum on Irish unity,” Sinn Fein leader Mary Lou McDonald said, referring to the peace accord signed in 1998 that ended three decades of sectarian violence in Northern Ireland.

“Ireland will not be the collateral damage of the Tory Brexit,” she added. Tory is another name for May’s Conservative Party.

President of the European Council Donald Tusk criticised those who pushed Brexit “without even a sketch of a plan.”https://t.co/X60sNCHcih

He annoyed ’em specially Wee Sammy Wilson of the DUP!

102 Further Cases Of Covid-19 Confirmed In The Republic