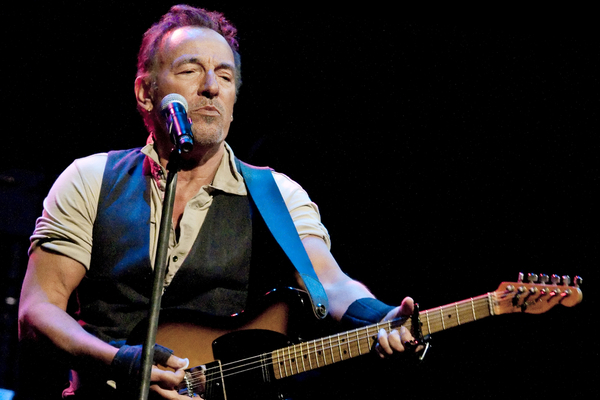 Mellencamp wrote and produced the song, with Springsteen lending his vocals and guitar playing.

The acoustic number sees the two legends alternate verses, singing in harmony on some lines.

Springsteen and Mellencamp have played together onstage in the past but this is the first time they’ve recorded together.

“Bruce is singing on the new record and is playing guitar,” Mellencamp told Billboard. “I finished the record a week ago today.”

Speaking on his E Street Radio show, Springsteen recently broke the news of his teaming up with Mellencamp, revealing he had been spending time with the singer in Indiana.

“I worked on three songs on John’s album and I spent some time in Indiana with him,” The Boss revealed. “I love John a lot. He’s a great songwriter and I have become very close [with him] and had a lot of fun with him. I sang a little bit on his record.”

Last weekend Mellencamp took to the stage at America’s annual Farm Aid benefit concert, which saw him share the bill with the likes of Willie Nelson, Margo Price and Dave Matthews.

After the pandemic forced Farm Aid to adopt a livestream approach in 2020, it returned to a live setting at the Xfinity Theatre in Hartford, Connecticut for this year’s event.

Speaking of benefits, Springsteen is set to headline this year’s Stand Up For Heroes, an annual concert held in New York to raise money for injured military veterans. In its 15th year the concert will take place on November 8th at New York’s Lincoln Center for the Performing Arts.

“Our military community sacrifices so much for their fellow citizens,” said concert organiser Bob Woodruff. “They have earned our enduring respect, and more importantly, our support. For 15 years, that has been the inspiration behind Stand Up for Heroes — an evening to honour, celebrate, and take action in support of our veterans and their families. The performances will be incredible, but my favourite part of the show is sharing the stories of our heroes.”

As with Farm Aid, Stand Up For Heroes was forced to go online in 2020. Springsteen performed at the last in-person edition in 2019 along with last year’s virtual concert.
Over $60 million has been raised by the event since its inception.

On September 11th Springsteen performed an acoustic version of I’ll See You in My Dreams at a 9/11 memorial ceremony in New York.