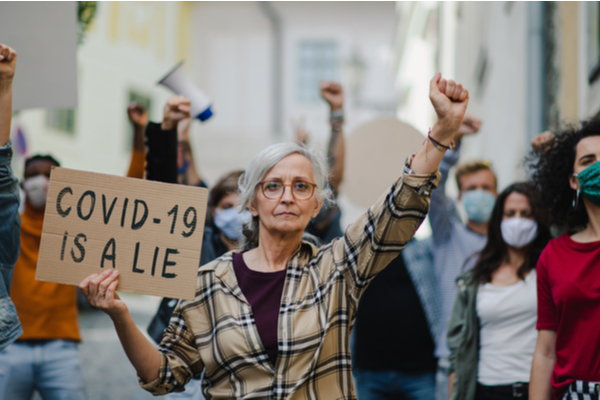 Dolores Cahill recently resigned as chair of the Irish Freedom Party, citing long-standing “differences of opinion” as the reason. The resignation follows calls from the UCDSU for the college to investigate Cahill’s participation and organisation of last week’s anti-lockdown protest.

Consideration of her position came on Sunday morning when the Ard Chomhairle of the party agreed to accept her resignation. The professor quit four days after making unsubstantiated claims at the rally that mask-wearing children will be starved of oxygen and have a lower IQ. Michael Leahy, a former member of the board of An Bórd Pleanála who ran in Clare’s 2020 General Election, will replace Cahill.

Hermann Kelly, founder of the Irish Freedom Party, said Cahill was busy with other organisations and “didn’t have sufficient time for party duty”. In a statement posted on its website, the party described Cahill as an “exceptionally talented person” and a “fearless advocate of freedom at a time of great upheaval in Ireland and around the world. She publicly defended our natural freedoms to travel, work, worship and meet our families in a time of lockdown.”

Cahill released a live stream statement via Facebook, saying she parted ways from the party on good terms, and invited her followers to join her on “a new path, that is more inclusive of all of the peoples of this great island”. She emphasised that this “new path” would be both “peaceful and lawful” in its goal to deliver “positive change for Ireland”.

UCD has not condemned statements made by Cahill, maintaining she is protected under the principle of Academic Freedom. A spokesperson took to Twitter to explain “this is Academic Freedom in action- the academic community must publicly question & interrogate this issue and seek to uphold high standards of scientific research and communication. It’s the obligation of members of this community to do so and of the HEIs to allow them.”

“I must correct that statement; while Prof Cahill has no teaching commitments in the current term, I cannot say that she has no research ongoing, only no research among ongoing COVID-19 related projects listed on our COVID-19 research website https://ucd.ie/research/covid19response/”