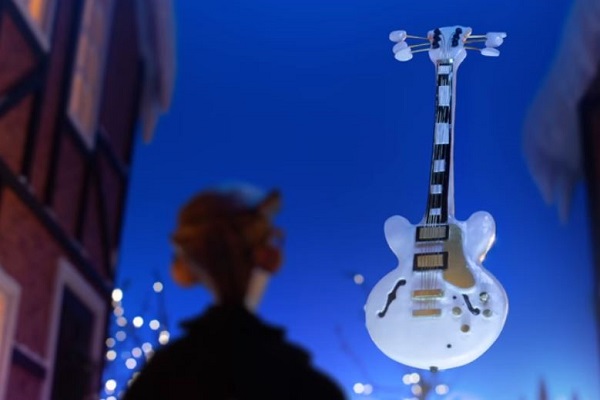 Eric Clapton has just released the video for “White Christmas,” one of the highlights on his new Happy Xmas holiday collection. The claymation-looking animated clip spotlights a young boy equally enthralled by an electric guitar and the sound of the blues.

Happy Xmas, which was released on October 12th, debuted at Number One on Billboard’s Holiday Albums chart. The album, which sold 6,000 units its first week, also entered the mainstream Billboard 200 albums chart at Number 168.

The album which features a cover illustration of Santa Claus by Clapton (below) is his 24th studio album and his first offering since 2016’s I Still Do. It’s out on Bushbranch Records/Surfdog Records.

The album’s 14 tracks are a mix of well-known tracks including “White Christmas,” “Silent Night,” and “Away in a Manger” and slightly more obscure holiday tunes as well as an original new track, “For Love On Christmas Day.” Clapton’s version of “Jingle Bells” is a tribute to “the memory of Avicii,” owing to Slowhand’s admiration for the late DJ.

Clapton co-produced Happy Xmas with longtime music producer Simon Climie and said of the record, “I had in my head that these holiday songs could be done with a slight blues tinge, and I started to figure out how to play the blues lines in between the vocals,”. “I got it down and one of the most identifiable songs on the album, the one that became the foundational style, is ‘Have Yourself a Merry Little Christmas.’”