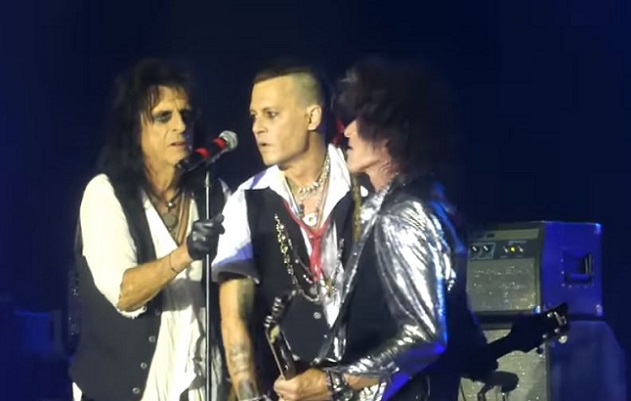 Fan Footage of Johnny Depp covering David Bowie’s ‘Heroes’ with his supergroup, the Hollywood Vampires, has been shared online and is available below.

Depp formed the supergroup with Alice Cooper and Aerosmith’s Joe Perry back in 2015 to honour the stars of the 70s. Footage of the performance from a gig at Sands Casino Event Center, Bethlehem has now surfaced.

The band also shared behind-the-scenes clips of them rehearsing ‘Heroes’ and Motorhead track ‘Ace of Spades’, before their gig in Tokyo, Japan, last night 15 September.

It’s believed Cooper first formed Hollywood Vampires as a celebrity drinking club on Los Angeles’ Sunset Strip in the 1970s. Musicians including The Who’s Keith Moon and the Monkees’ Micky Dolenz are reported to have been in attendance.

Depp recently opened up about his struggles with alcohol and depression after problems in his personal and professional life left him feeling “low.” Depp endured a widely publicised divorce with ex-wife Amber Heard back  in 2016 and also found himself in the midst of a legal battle with his old management company .

Speaking to Rolling Stone, Depp admitted,  “I was as low as I believe I could have gotten..the next step [for me] was, ‘You’re going to arrive somewhere with you eyes open and you’re going to leave there with your eyes closed. I couldn’t take the pain every day.”