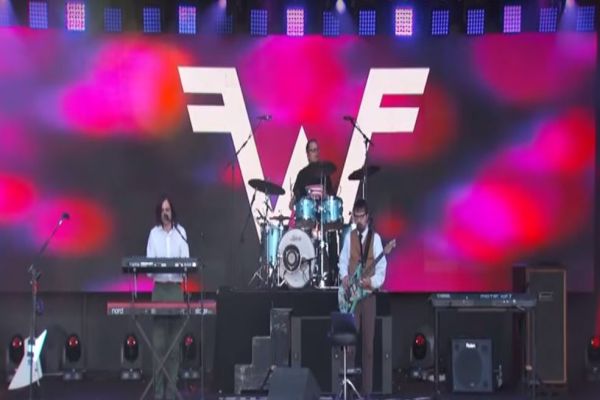 After a relentless campaign initiated by a then anonymous @weezerafrica fan pleading with Weezer to release a cover of Toto’s classic hit single Africa, the band finally gave in after endless pressure and released a cover of not only ‘Africa‘  but also their version of Toto’s #2 hit single ‘Rosanna.’

Singer Rivers Cuomo was decked out in a brown vest, baggy tan pants, a maroon tie and a shaggy beard. The singer and his band coasted through ‘Africa‘ with ease, and also surprised the audience when he introduced Steve Porcaro of Toto, who came out and gave a tight, improvised keyboard solo.

Both of the covers by the band recently hit the Billboard Hot Rock Songs chart, becoming the group’s highest charting tracks’s since 2009’s ‘(If You’re Wondering If I Want You To) I Want You To.’