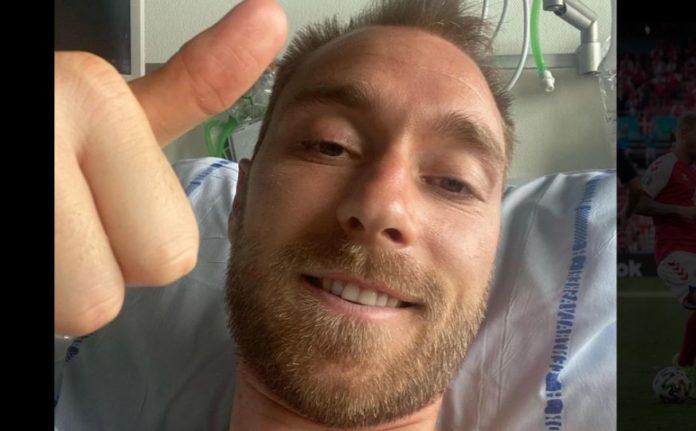 Christian Eriksen has given a thumbs up and was all smiles from his hospital bed, in the first pictures taken since his horrific cardiac arrest.

The Inter Milan player collapsed during Denmark’s match against Finland in Euro 2020 on Saturday.

Medics gave him CPR and shocked him with a defribillator. The medics who ran onto the pitch were Morten and his brother Anders Boesen. The pair have also received huge praise for reacting so quickly.

Denmark’s captain Simon Kjaer helped to stop Eriksen from swallowing his tongue after he collapsed. While goalkeeper Kasper Schmeichel comforted Eriksen’s wife Sabrina who was understanably in tears, while Eriksen was being treated.

“Big thanks for your sweet and amazing gestures”

Since then, Eriksen has taken to Instagram to share a positive message following his on field healthscare.

“Hello everyone”, he wrote. “Big thanks for your sweet and amazing greetings and messages from all around the world. It means a lot to me and my family”.

“I’m fine – under the circumstances. I still have to go through some examinations at the hospital, but I feel okay”, he added.

“Now, I will cheer on the boys on the Denmark team in the next matches. Play for all of Denmark. Best, Christian”.

Should the game have continued?

Following Eriksen’s departure from the pitch. It was decided that the game would continue and the remaining 50 minutes of the game be played.

Finland ultimately won the match 1-0 thanks to a goal from Joel Pohjanpalo, while Pierre Hoejbjerg missed a penalty for Denmark.

The big question on everyone’s lips since then, has been should the game have continued?

It was initially reported that both sets of players wanted to complete the match. However, according to Kasper Schmeichel’s father and former legendary goalkeeper Peter Schmeichel, this was not the case.

Speaking to GMB, Schemeichel had this to say.

“They said the players insisted on playing. I know that not to be the truth. Or that’s how you see the truth”, he said.

“They were left with three options. One was to play immediately and get the last 50 minutes played”, he continued.

“And the third option was to forfeit the game and lose 3-0”.

“So, you know, work it out for yourself. Is it the players’ wish to play? Did they have any choice really? I don’t think they had”.

“More concerned with how you guys are doing”

Denmark manager Kasper Hjumuland revealed that Christian Eriksen was in contact with the doctors and urged his team mates to have a good tournament.

“Christian was concerned about us and his family”, he said.

“He said, ‘I don’t remember much, I’m more concerned about how you guys are doing. I think you are feeling worse than I am. I feel as if I’m about to go training now, boys’.

“That’s typical Christian”, he added. “He’s a hell of a player, but what a person he is as well”.

“He would like us to play. It was good to see him smile and we will try to get ourselves together and play for Christian”.