Home Music Christy Moore Tells Noisy Crowd To “Get Your Money Back” And “F**k... 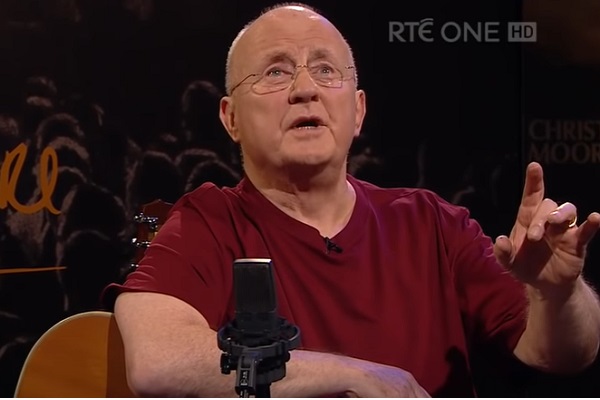 Irish folk music legend Christy Moore did not hold back when a noisy section of an audience were getting on his nerves.

During one his shows at Dublin’s Vicar Street, Christy Moore did not take any prisoners when he noticed a section of the audience misbehaving.

Christy Moore was performing live at the venue as part of his concert dates across November, December and January.

Moore singles out “those w*****s in the balcony”

At one of these gigs, Christy Moore did not hold back in his accosting of a noisy section of the audience.

“I’d like to apologise to anybody sitting near to those wa**kers on the balcony there”, Christy can be heard saying.

As he points to the balcony, Moore continued, “I don’t know if you can hear me, but I can hear you all night. Get your money back and fu**k off!”.

The rest of the crowd were clearly impressed as they erupted into huge applause as they were clearly fed up with the heckler themselves.

After this video was published online, people responded in their droves in support of Moore.

One person wrote, “I get real gig rage at that sort of behaviour. What is the point of coming to a gig if you are just going to talk all the way through it”.

Ahead of his gigs, Christy Moore also received the Lifetime Achievement Award at the RTÉ Radio Awards last month.

Calling it a “great honour”, the singer said, “My life has been immersed in the pursuit of folk songs and ballads”, Christy said. “Being part of our folk song community has been an important part of my life”.

He also added, “To receive this award from my peers is a great honour, one that I will remember and cherish. We need songs, songs need singers, singers need listeners”.

“We all need each other”.