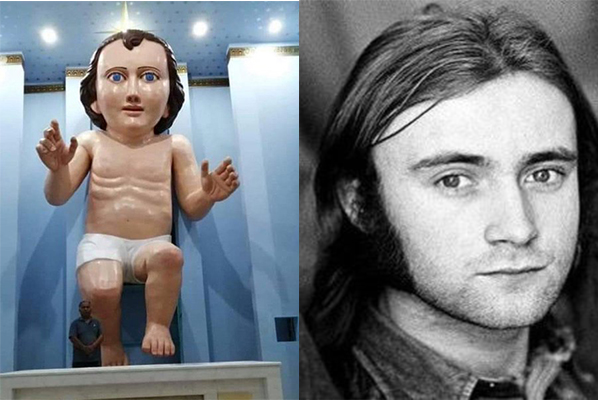 A Mexican church asserts that it has “accidentally” erected the largest baby Jesus statue on earth.

And as the NY Post has observed the baby Jesus bears an uncanny resemblance to Phil Collins!

At roughly 22-foot-tall, the 2,000-pound bambino was constructed in the city of Chimalhuacán.

It was transported to the La EpifanÍa del Señor church in the central Mexican state of Zacatecas, where it has been erected.

The Rev. Humberto Rodriguez tells Central European News he only meant to commission a statue that would “fit the church.”

However, he may have created the biggest Jesus Christ / Phil Collins lookalike in the world! The Reverend said:

“There is a space of between 26 feet between the ceiling and the floor and I ordered a statue measuring 21 feet, but I never intended to make it the biggest baby Jesus statue in the world.”

Rodriguez had no comment regarding the statue’s resemblance to Collins. Phil Collins’ reps also have so far not made any comment about this massive and accidental honour.

When it was finished, the church began investigating the sizes of other baby Jesus statues around the world and discovered that the previous record-holder was just 16 feet tall and 661 pounds.