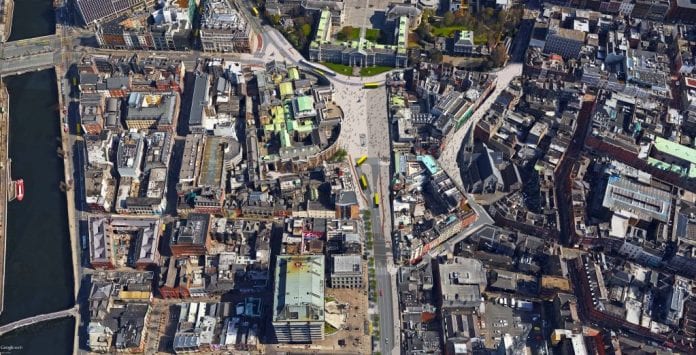 Dublin City Council has confirmed that a further period of public consultation will take place on its proposals for the development of College Green as a civic plaza.

This follows the submission of further information requested by An Bord Pleanála regarding the effects of the proposed development on the environment and the impact of the ancillary traffic management measures required.

The public consultation process will start on 16th November for a three-week period. Details will be announced in the national press and the submission will be available for inspection at An Bord Pleanála, 64 Marlborough Street, Dublin 1 and at Dublin City Council’s Civic Offices, Wood Quay, Dublin 8 and on its website.

Submissions or further observations in relation to the further information may be made in writing to An Bord Pleanála by 7th December 2017.

Dublin City Council is proposing to develop College Green as a pedestrian priority civic space to significantly improve the quality of the city’s public realm.

The design for an attractive tree lined, granite paved 7,300 sq. metre space will facilitate major public gatherings and processional events through the city. It will have the capacity to accommodate up to 15,000 people and will be fully equipped with the infrastructure required to stage large public events.

The existing traffic arrangements in College Green will remain in place until the New Year. This will help facilitate “Operation Open City” which aims to keep public transport moving during the run up to Christmas.

The bus services which were diverted away from College Green during the Luas works will continue to use their current routes until the New Year when they will begin to change to using Lower Grafton Street.

The existing restriction on taxis using lower Grafton Street in a northbound direction will remain in place.

It is anticipated by Dublin City Council that additional measures will have to be introduced to reduce east west traffic levels in the College Green area. However, this requirement will be assessed in the New Year as the increase in bus numbers in Lower Grafton Street and the introduction of longer trams starts to take place.

Pedestrian waiting times will also be addressed as the testing of the Luas trams and the change in layout at College Green has already resulted in longer waiting times at the traffic light crossings. Work will begin to restore waiting times to what they were before the Luas construction works to facilitate a freer flow of pedestrians.

Dublin City Council and the NTA are also investigating the best way in which to facilitate two-way cycling in the segregated cycling track alongside the Bank of Ireland, given that College Green has not been closed to east-west traffic.

Met Eireann Forecast Cold Dry Day With A Rise In Temps On...

France Will Open To European And US Tourists With Vaccination Cards...