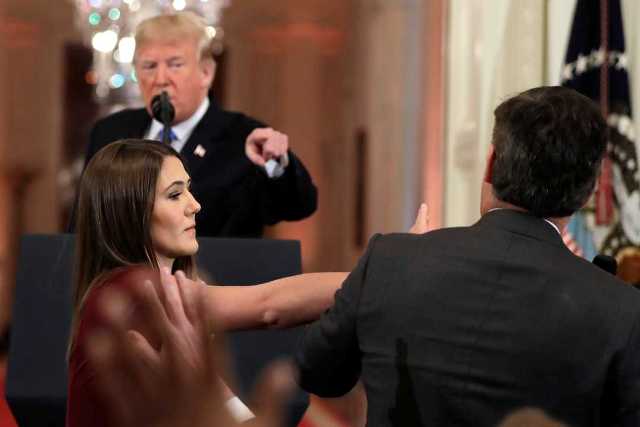 CNN is suing Donald Trump and several of his aides, after the network’s chief White House correspondent Jim Acosta was banned from accessing the building.

Last week, the White House suspended Acosta’s press pass, after the reporter asked the president about his language surrounding the migrant caravan heading to the US border.

President Trump got into a heated exchange with Jim Acosta during a post-election press conference in the East Room of the White House on November 7th.

The lawsuit alleges that Acosta and CNN’s First and Fifth Amendment rights are being violated by the ban. Both CNN and Acosta are plaintiffs in the lawsuit.

The officer is identified as John Doe in the suit, pending his identification. The six defendants are all named because of their roles in enforcing and announcing Acosta’s suspension.

Last Wednesday, shortly after Acosta was denied entry to the White House grounds, Sanders defended the unprecedented step by claiming that he had behaved inappropriately at a presidential news conference.

CNN and numerous journalism advocacy groups rejected that assertion and said his pass should be reinstated.

CNN sent a letter to the White House requesting the immediate reinstatement of Acosta’s pass and warning of a possible lawsuit.

CNN said it is

”…seeking a preliminary injunction as soon as possible so that Acosta can return to the White House right away, and a ruling from the court preventing the White House from revoking Acosta’s pass in the future.

We have asked this court for an immediate restraining order requiring the pass be returned to Jim, and will seek permanent relief as part of this process.”

CNN also asserted that other news organizations could have been targeted by the Trump administration this way, and could be in the future.

“While the suit is specific to CNN and Acosta, this could have happened to anyone,” the network said. “If left unchallenged, the actions of the White House would create a dangerous chilling effect for any journalist who covers our elected officials.”