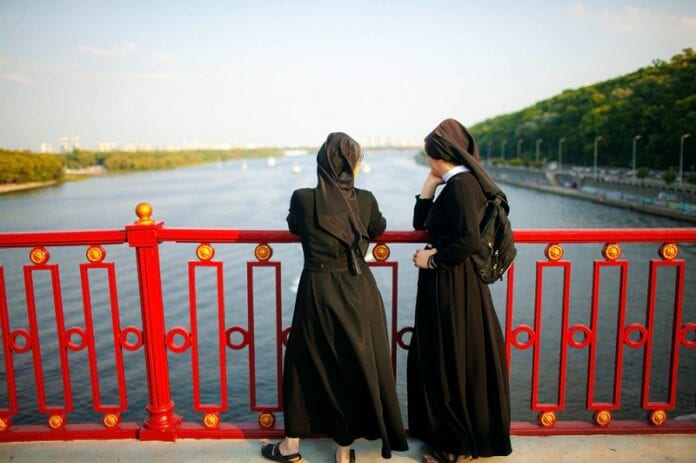 A pair of Nuns from Cork broke Covid-19 regulations to attend an exorcism of the Dáil before Christmas.

The two nuns have raised over €77,000 in a crowdfunding effort after being ordered to leave their site in West Cork.

The pair attended the exorcism and then went to Herbert Park for a subsequent mass.

The mass was given by Fr Giacomo Ballini who told attendees that “no human power can take away the right to say Mass”.

A video of the event has circulated online which shows around 70 people in attendance which is a breach of the Covid-19 regulations as crowds outside at the time were limited to 15 people.

The video was posted on YouTube and you can check it out here.

Fr Ballini is a member of The Society of St Pius Resistance, a splinter group of the controversial SSPX which was founded in 1970 by a former bishop who clashed with the Vatican over reforms.

He has been operating out of a farmhouse in Drinagh in Cork.

In their GoFundMe appeal, the nuns describe themselves as being “zealously faithful to the True Catholic Faith according to Holy Tradition prior to Vatican II”.

Earlier this month, Sr Irene posted on the GoFundMe page that the “outstanding charity toward our needs has finally made it possible for us to purchase some property”.

“How has this been possible when the children of darkness have done their utmost to try and crush us?” she wrote.

“By spreading lies on local West Cork newspapers, on social media, and filing complaints about our fundraising campaign to local authorities, they have tried to prevent you, our benefactors, from helping us achieve our goal.

She added “Yet as Holy Scripture tells us, the light shines in the darkness, and the darkness did not overcome it. Cf. John 1:5. No matter how deep the darkness, it is never able to extinguish a light.”

The nuns belong to the Carmelite Sisters of the Holy Face of Jesus. They have been ordered to leave their site in West Cork for breaching planning regulations and now they could face more trouble for breaching Covid-19 regulations.

There has been no statement from the nuns or Fr Ballini about the exorcism.