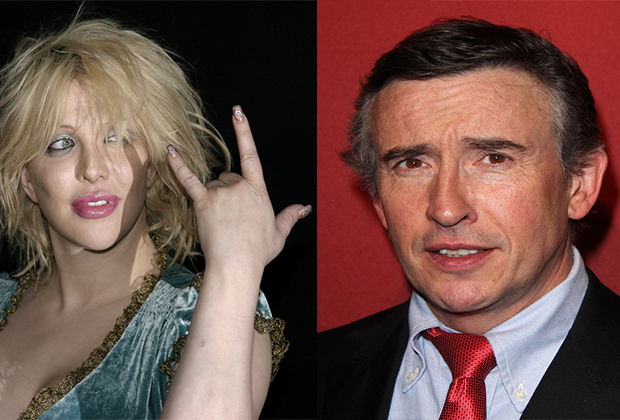 According to Radar Online, comedian, Steve Coogan, has labelled his former girlfriend Courtney Love ‘nuts’. The Alan Partridge actor claims that the Hole frontwoman enlisted the help of a private detective to follow him. It’s reported that Coogan and Love had a rather tumultuous affair.

Coogan was speaking at a party in London, “She hired a private detective to stalk me — she’s nuts.” Although Love didn’t refute the allegation she responded to Coogan’s accusation saying,

“I truly believed we all had moved on from this wreckage of the past. Hopefully, the guy [Coogan] leaves us alone in this town and goes back to Brighton, or wherever the hell he’s from, and just maybe stays there.”

According to Radar Coogan said, “I’ve nothing to hide,” he says. “I’m not worried about anyone coming out against me — all my relationships have been consensual. I don’t do dating apps – I’m not on Tinder.”

It’s not the first time Love has hired a private investigator. In 1994 she hired Tom Grant just before Kurt Cobain’s death to try to locate him. According to Alternative Nation, Grant then accused Love of having Cobain murdered, and has made it his vocation to support that theory. The PD featured in the docudrama ‘Soaked in Bleach’.

Meanwhile, Coogan is hotly tipped to be nominated for an Oscar for his performance in ‘Stan & Ollie.’