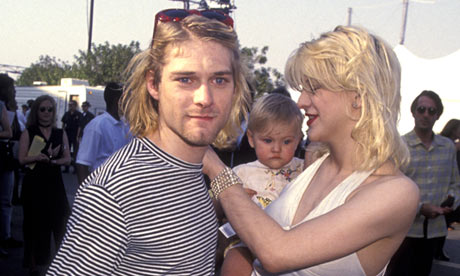 In a new article with Interview Magazine, Courtney Love has revealed that Kurt Cobain’s ghost visited her, Frances Bean Cobain, and Edward Norton in the late 90’s.

The grunge queen also shared the final words that she heard the ghost utter: “When I moved to Hancock Park from Seattle with Frances and Edward [Norton, Love’s ex-boy-friend], I saw Kurt in a chair for a moment and he said hi to me and then he left.”

She also discussed advice she has passed down to her daughter.

“I used to have a really good one, which is: Always keep the negatives. But technology no longer recognizes that. This world has gone technologically way beyond me. [The costume designer] Arianne Phillips recently sent me a very frightening link. It was a talk at Business of Fashion by Chris Wylie, who was the whistleblower at Cambridge Analytica.”

“He’s crazy and super hyperbolic, but he talks about how the data gathered by fashion brands was used to help Steve Bannon [build the alt-right]. He talks about how the founders are not nice people and how they don’t recognize any laws and they’re not being called to task. Oh my god, the culture wars are really scary.”

Courtney Love responded to that post, “You guys WHAT the FUCK? I hate being put in this position. You should know better!”

This is not new territory for Love, when it comes to clothing lines that allegedly ripoff Nirvana, as herself, Dave Grohl, Krist Novoselic, and Frances Bean Cobain are suing Marc Jacobs over a new t-shirt design, with the four even set to testify in court, The Blast reports.

According to The Blast, “Marc Jacobs is planning on calling all four of them as witnesses in the case. Love and the surviving members of Nirvana had battled for years following Kurt Cobain’s death in 1994. They even had dueling lawsuits over Nirvana money for some time.

The trio ended their 20-year feud when Nirvana was inducted into the Rock and Roll Hall of Fame in 2014. According to Alternative Nation, t’s reported that damages by Jacobs total in excess of $1 million.”