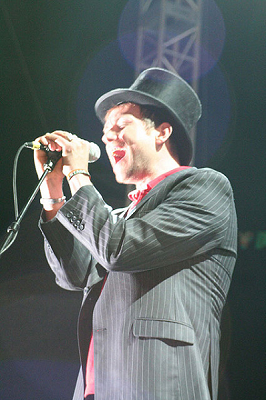 Blur’s frontman Damon Albarn has confirmed he is working on two new albums for his very successful side-projects.

In an interview, the singer stated that he had plenty of material written for both Gorillaz and The Good, The Bad And The Queen.

Speaking with The Sydney Morning Herald, while touring to support his solo debut album Everyday Robots, Albarn said he is in the process of rebooting the animated virtual band Gorillaz for a release in 2016.

The virtual band’s last release was The Fall in 2011, the upcoming 2016 LP will be their fifth studio album release. “I was just excited to create and still am. I love working with people, essentially. I do drive stuff, but I love the atmosphere and process of collaboration. It’s my favourite thing.”

One of his other projects, the alt-rock supergroup The Good, The Bad And The Queen, are also scheduled in for a new album in the not so distant future. The band made up of Damon Albarn, The Clash’s bassist Paul Simonon, The Verve’s guitarist/keyboardist Simon Tong, drummer Tony Allen and producer for The Shins, U2, The Black Keys, Danger Mouse.

Albarn said that The Good, The Bad And The Queen’s album had been written, it was now just a matter of finding time to record it.

If you’re hoping for any material from Blur, don’t hold your breath. Damon said, “I would imagine there’s some kind of future, but at the moment there’s no time for the future – only the present. Who knows? I’m reluctant to say anything [about Blur], because if I do, it just gets taken out of context and then I’m accused of being a wind-up.”

Damon Albarn recently played the song ‘Everyday Robots’ to a couple of Androids in Tokyo, watch the surreal video here.