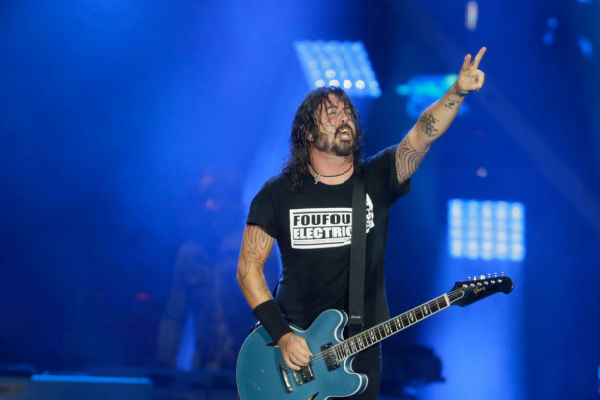 On a recent visit to Dublin, Dave Grohl managed to help to fulfill a family connection for a fan, when he posed for a photo this week.

The Foo Fighters frontman was out dining at Ballsbridge’s Roly’s Bistro. While leaving the premises, the rocker posed for photos with several customers and staff members.

Grohl was hailed as a “very friendly, very amenable and a lovely fella”, by the restaurant’s co owner Paul Cartwright.

However, it was one particular fan who bumped into Grohl, who fulfilled a familial connection.

Carmel Breheny a Sligo native met Grohl at the restaurant, who suddenly realised her connection to the rock music legend.

As it turns out, Ms Breheny’s brother Joe worked as a lights designer, whose last job saw him work for Grohl’s band Foo Fighters.

Joe was forced to miss Foo Fighters’ European Leg of their tour that year, after receiving chemotherapy after being diagnosed with cancer in 2009. Sadly, he passed away aged 42.

“very much a right time” – Carmel On Meeting Dave Grohl

Speaking in an interview, Carmel Breheny shed further light on just how much working for Foo Fighters meant to her late brother.

Revealing that Joe found Foo Fighters to be “one of the nicest bands to be on tour with”, Carmel also added that a track from the band was the last ever one to be played at his funeral.

“He was gutted to be missing it because he loved working with them. My brother toured with an awful lot of bands, and he always said that the Foo Fighters were one of the nicest to be on tour with”, she said.

Carmel continued, “When my brother was buried, his remains we repatriated to Sligo as was his wish, and at the graveside the last song we played was a Foo Fighters song”.

“When my brother was buried, his remains we repatriated to Sligo as was his wish, and at the graveside the last song we played was a Foo Fighters song”.

Carmel subsequently described Grohl as “consistently nice” to all that met him.

“Oh my God he was so nice, couldn’t have been nicer. He was so charming and so patient for a man who literally being abducted by people like myself,” she said.

“I was very excited to meet him because I’ve been a fan since the Nirvana days, and he just seems like a really nice human being. You just get that feeling about him, he was a guy who was quietly going about his business but happy to let fans get their photos”.

While he was celebrating his 54th birthday, the reason that Grohl chose to do so in Dublin remains unknown.

Last month, the singer also joined forces with his daughter Violet at the ‘Hannukah Sessions’. More on this here.