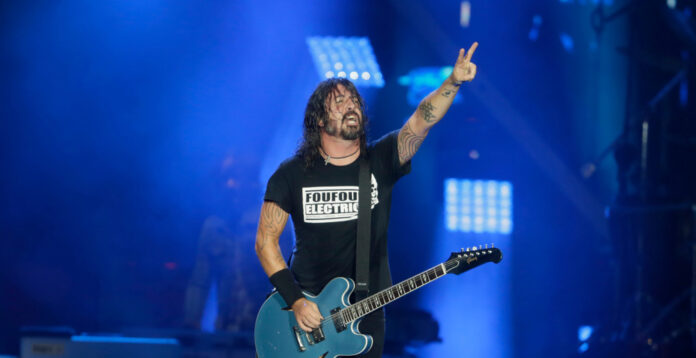 Dave Grohl has revealed that he recorded the vocal tracks for the upcoming album Medicine at Midnight in a bathroom. The band originally hinted at the idea in January, when they shared a photo of a microphone set up in a bathtub, with the caption; “Come on in, the water’s fine…..”

The Foo Fighters frontman later revealed that the band had worked in a house from the 1940’s, which Dave thought was haunted. In a recent interview, Grohl discussed how the band used the house to record the album.

“We moved into this funky old house in my neighbourhood, built a studio in the upstairs bedroom,” said Grohl. ” [We] recorded the drums in the living room, the guitars were in the bedroom. I did the vocals in the bathroom next to the toilet.”

Grohl added: “We started this, I think, in maybe September last year, and we were finished by January, February. We were totally done – mixed, mastered, ready to go. Artwork was done, T-shirts were being made, equipment was on the trucks – we were good to go. And then everything just kind of shut down.”

Grohl said the coronavirus pretty much derailed the band’s 25th-anniversary plans, which included a Van Tour of the cities they played in 1995. He also over when to release the new album, which is now scheduled to release on February 26th. Grohl recalled the “months and months” of discussions while waiting to see if pandemic conditions change.

“Six or seven months went by, and I’m like, ‘We make this music for people to hear. We don’t just make it so that we can go hit the road. We write these songs so people can enjoy them and sing along, whether it’s in their kitchen by themselves with a bottle of Crown Royal or in a stadium bouncing around, singing the choruses.

“So I was, like, ‘Right now, more than ever, people need something to lift their spirits, something to give them some feeling of relief or escape. … We’ve gotta put it out,” said an excited Grohl. “Let’s put it out right now.’ … I don’t know when we’re gonna hit the road, but we need to give the music to the people, ’cause that’s why we make it.”

In other news, Dave Grohl will feature on Ringo Starr’s new EP called ‘Zoom In’ that also features Paul McCartney, Finneas and many more.