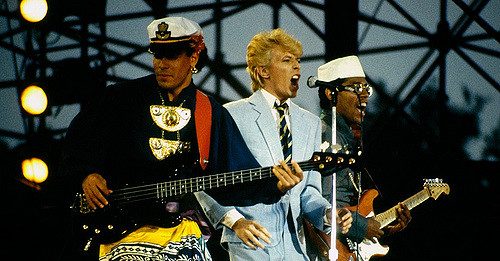 It was Grammy’s night in Hollywood last night and David Bowie ran supreme. He posthumously picked up a whopping five Grammys.

Bowie won Best Rock Performance, Best Rock Song and Best Alternative Music Album for Blackstar and its title track, leaving acts like Iggy Pop, Metallica, Highly suspect and Disturbed trailing in his shadow.
It was also a big night for Megadeth who finally picked up their long awaited Grammy. Megadeth had previously been one of the most nominated acts that had never won the award. However, there was a bit of an awkward moment when the Grammy live band played Metallica’s “Master of Puppets” after Megadeth’s win was announced.

Along with losing to Megadeth, Metallica had a painful night when their much hyped performance with Lady Gaga hit a snag when Hetfield’s mic wasn’t working and he had to share with Gaga.

Below are all the awards in the Rock Categories and highlighted are the winners.

Want To Join A David Bowie Book Club? Now You Can!