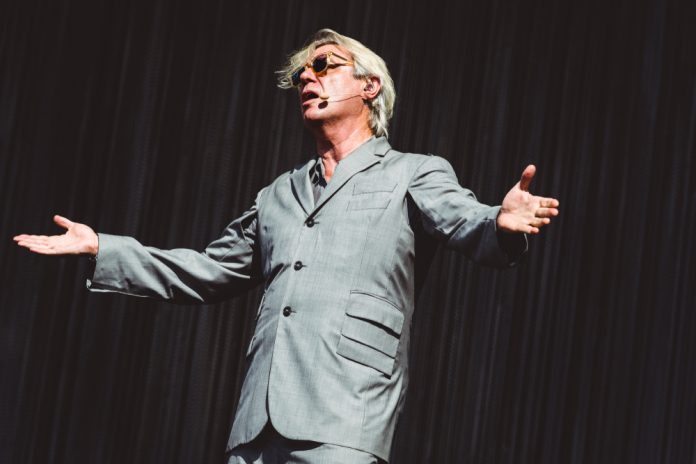 David Byrne, iconic frontman of Talking Heads and prolific solo artist has just revealed that he is to undertake a new editorial project called ‘Reasons to be Cheerful’.

The magazine which is only available online basically covers the worldwide problems that face us all, but at the same time advocates finding a solution to the problems associated with living in this precarious world.

The role that Byrne follows in the magazine takes a look at an eclectic collection of recent solo ventures that includes his Broadway adaptation of the 2018 album American Utopia.

According to Spin, Byrne revealed the details of his new site in a statement by which said:

“It often seems as if the world is going straight to Hell. I wake up in the morning, I look at the paper, and I say to myself, ‘Oh no!’ Often I’m depressed for half the day.”

The Talking Heads frontman wants to offer not just a solution but also a therapy of sorts:

“As a kind of remedy, and possibly as a kind of therapy, I started collecting good news.”

He also explains the origins of the publication, which started by way of trying to share good news with his friends. “Their responses were encouraging, so I created a website called Reasons to be Cheerful and started writing.”

Reasons to be Cheerful looks like it will be an ongoing editorial project that will hopefully expand and mature over time. “We hope to balance out some of the amplified negativity and show that things might not be as bad as we think,” according to the singer.

The online editorial also includes co-editors Christine McLaren and Will Doig, their collaboration bring experience from Monocle, Metropolis, the Globe and Mail, The Guardian, and NPR.

“Through stories of hope, rooted in evidence, Reasons to be Cheerful aims to inspire us all to be curious about how the world can be better, and ask ourselves how we can be part of that change,” the publication’s about page reads.

Watch Byrne outline the project in a new video below, check out the full site at reasonstobecheerful.world.

Watch: The Pretenders Are Joined On Stage By The Black Keys’...