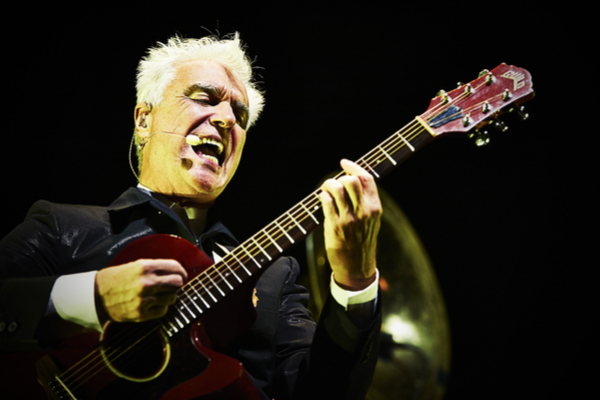 David Byrne, the former frontman with Talking Heads is due to take up a residency in New York later this year.

According to the NME, Byrne will bring his Utopia tour to Broadway and take up a residency previously held by music icons Bruce Springsteen and Morrissey.

Performances of the show at the Hudson Theatre will preview on October 4, 2019, and the opening night will take place on October 20. The length of the residency is scheduled until January 20, 2020.

Byrne said in a statement, that the reason he was taking the show to Broadway was “Because of how theatrical the show is, others started telling me ‘this needs to go to Broadway,’”

Byrne was enthusiastic about how the show could work on the stage:

“Why not? Byrne knew what the full potential of a show like this could achieve in a theatre on Broadway where all aspects of the show could be perfected like the lights, sound, movement storyline and narrative.”

Byrne continued: “I asked Alex Timbers, whom I’d worked with twice before on musicals, to help. He brought some original and insightful ideas to the room, ideas I was too close to imagine, and we used those to build on what we had.”

American Utopia will feature 11 musicians as well as Byrne himself, they will perform versions of some of his songs as well as material from Talking Heads.

The choreography is by Annie-B Parson. NME stated last year that Byrne’s American Utopia tour “may just be the best live show of all-time”.  Subsequently, a live EP of six songs taken from the performance, has been released.

McCartney Ranks Ringo No1 Drummer And Says “I Can’t Help Being...