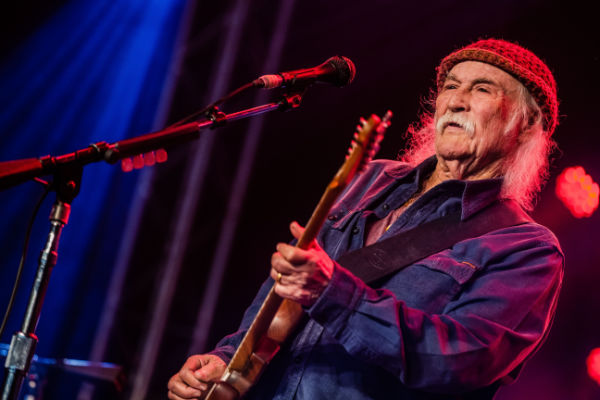 According to reports, David Crosby was making plans for a new album and live tour before he died.

Crosby died a few days ago aged 81 after a “long illness”, as confirmed by his wife Jan.

She wrote, “It is with great sadness after a long illness, that our beloved David (Croz) Crosby has passed away. He was lovingly surrounded by his wife and soulmate Jan and son Django”.

However in a recent interview, guitarist Steve Postell who had collaborated with Crosby, said that the late Byrds star was showing no signs of slowing down, insisting that he was working on new music and a tour.

“We were talking tour buses and what kind of venues and the whole team was all back together again – the road manager and tour manager and sound guys – on top of this band we’d put together”, Postell explained.

“There was not even a remote sense that we weren’t about ready to hit the world. And it’s a shame people didn’t get to hear it”.

Elaborating further, Postell revealed that himself and Crosby had just started rehearsals the week of his death, and that a tour was even on the horizon.

“He was showing us new songs, like, ‘What do you think of these lyrics?’ He hadn’t lost the fire. I’d like people to know that he was on it”, stated Postell.

“He was writing, playing, singing his ass off and preparing a fantastic show. That’s what he was doing. He was not lying in a bed for two years, out of it. That’s not what happened at all”.

As well as achieving huge success with The Byrds, David Crosby also formed a band with Graham Nash, Stephen Stills and Neil Young.

Following his death, the three bandmates paid moving tributes to Crosby. Check out what they said here.

Footage of his last ever live performance was also shared from 2019, which saw Crosby share the stage with long time collaborator Michelle Willis.