Home Music News On This Day In Music: Chuck Berry’s Johnny B. Goode Was Released 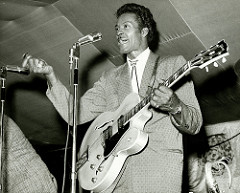 When the late Chuck Berry passed away recently, major recording artists old and young expressed their grief and cited the rock music legend as a leading influence to their own sound. Bands such as Green Day, Red Hot Chili Peppers, the Roots and Sting paid tribute to the late rocker through music. And the song they all chose to cover was the 1958 classic, ‘Johnny be Goode’.

Perhaps Berry’s most famous track, ‘Johnny B Goode’ has been covered by many artists over the years, including The Beatles, Jimi Hendrix and Judas Priest.

It was written by Berry in 1955, and is about an illiterate “country boy” from the New Orleans area, who plays a guitar “just like ringing a bell”. This boy might one day have his “name in lights. It entered the US charts six weeks later and peaked at #8. Berry acknowledged that the song is partly autobiographical. He also said that the original lyrics referred to Johnny as a “coloured boy”, but he changed it to “country boy” to ensure radio play.

Sting took to social media recently to say, “We lost Chuck Berry,” next to a snippet of his solo acoustic rendition of “Johnny B. Goode.” “Without Chuck Berry, there’s no Rolling Stones, there’s no Beatles, there’s no me. He was an incredibly influential musician and amazing lyricist. Though I’d never sung this song before, I wanted to find a way to pay tribute to him because we owe him so much.”

The New York Times said of the late musician, “Mr. Berry was its [Rock N’ Roll] master theorist and conceptual genius, the songwriter who understood what the kids wanted before they knew themselves.”

Berry had been working on a new album and in a statement his family provided an update on its release:

“Since Chuck’s passing on Saturday, the Berry family has received many inquiries from friends, fans and media about the status of his forthcoming album CHUCK, which was originally announced on his 90th birthday, 18 October 2016.”

Kiss To Release Their Own Brand Of Coffee Next Year

Just Another Pink Floyd CD In The Wall