Home Music News On This Day In Music: The Clash Started Recording Their Debut Album 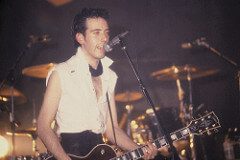 On February 10 1977, The Clash began recording their debut album The Clash at CBS studios London, England. The album was recorded over three weekend sessions at CBS Studio 3. By the third of these sessions the album was recorded and mixed to completion, with the tapes being delivered to CBS at the start of March. It cost just £4000 to produce.

Most of the debut LP The Clash was written on the 18th floor of a council high rise on London’s Harrow Rd. The flat was owned by Mick’s grandmother, who regularly turned up at Clash gigs

The self-titled album was released on 8 April 1977 and entered the British charts at #12.

Throughout 1977 the band were arrested for some strange crimes, for example Strummer and Headon were arrested for stealing pillowcases from a hotel room in Newcastle. The band went on to have a series of confrontations with the police, the group members were arrested on charges ranging from petty theft to illegal possession of firearms (for shooting prize pigeons).

As reported in Rolling Stone, on Tuesday, nine city and state governments in the U.S.A will unite with 23 radio stations to honor the punk band’s legacy. Event organizer and KEXP host John Richards said the band is still relevant today.

“The message of the Clash, so influenced by the international sounds they grew up with, is both powerful and uplifting especially now in this time of struggle,” he said.

“International Clash Day ensures new generations are aware that the band, through Joe’s snarling lyrics, called out the conspirators and united the people to stand up and be counted,” Steve Mullen of the Joe Strummer Foundation said. “As Joe Strummer once said: ‘Without people, you’re nothing’ and never a true enough phrase has been spoken.”