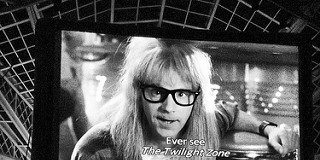 Believe it or not: 25 years ago today, rock comedy Wayne’s World made its debut on the big screen. “Ex-queeze me?!”

Based on the Saturday Night Live sketches with Wayne Campbell (Mike Myers), the enthusiastic host of a public access cable show from his parents’ couch, and Garth Algar (Dana Carvey), his socially inept and genius sidekick, went on to surpass expectation at the box office and developed a cult following. The film featured appearances from Meat Loaf and Alice Cooper and the use of Queen’s Bohemian Rhapsody’ in the film propelled the song to No.2 on the US singles charts nearly 20 years after its first release.

I grew up in Scarborough, Ontario of British parents. I’d gone to England in ’75 with my family and heard “Bohemian Rhapsody” on the radio. We were obsessed with it. Me and my brother, our friends’ car was a powder blue Dodge Dart Swinger that had a vomit stain on the side of it that someone chiseled in the shape of Elvis Presley. We’d drive down the Don Valley Parkway, listening to Bohemian Rhapsody. We would time it to enter the Toronto city limits when the rocking part would kick in. I was “Galileo!” three of five. If I took somebody else’s “Galileo!” or somebody took mine, a fight would ensue. It’s just something that I always back-pocketed. Wayne’s World was my childhood. I knew only to write what I knew.

Wayne’s World also brought Alice Copper to a new audience. In his scene Wayne and Garth meet Cooper backstage. When he asks them to “hang out” the pair bow to their knees and say: “We’re not worthy, we’re not worthy, we’re scum”. “I think we did it in two takes,” Cooper reflected with Billboard recently. “They [Myers and Carvey] were doing everything they could to get me to break up. But they didn’t realise my iron will, so I went right through that dialogue and I think I surprised them. “But if you would have seen the outtakes of ‘We’re not worthy, we’re scum,’ it goes on for like five or six minutes. And it just gets vile.  Whoever owns those outtakes owns a little treasure.”

He also revealed that fans still re-enact the scene during chance run-ins. “Airports is when everybody does, ‘We’re not worthy!’ I always try to let them think it’s the first time anybody’s ever done that. And they’re so clever,” he told Billboard.

“We’re not worthy” is not the only quotable lines from the  rock loving pair. They also gave us, “No Stairway. Denied”; “It will be mine. Oh yes. It will be mine”, “Schwing” and revived the “Not!” joke. However with it being Valentine’s day let us part with some Garth and Wayne wisdom on love:

Garth: Uhm Wayne? What do you do if every time you see this one incredible woman, you think you’re gonna hurl?”

Wayne: “I say hurl. If you blow chunks and she comes back, she’s yours. But if you spew and she bolts, then it was never meant to be.”

€50 An Hour Offer For Nude Cleaners