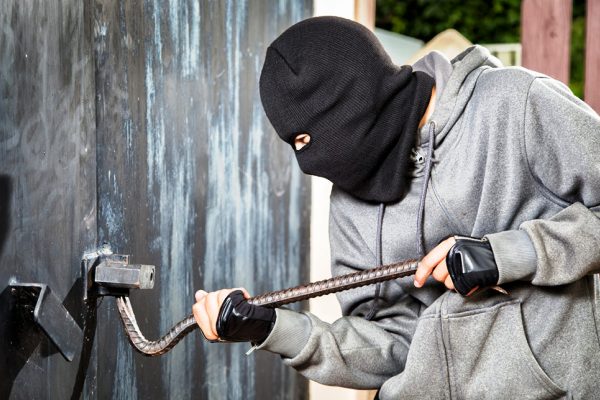 Almost a quarter of a million burglaries have occurred in Ireland over the past decade, according to new analysis carried out by PhoneWatch.

This is equivalent to one in every seven homes or businesses experiencing a break-in during this time, which PhoneWatch say “demonstrates the importance for all of us to be vigilant in protecting our properties.”

Speaking about the figures, PhoneWatch Managing Director, Eoin Dunne said, “While we’re seeing a welcome reduction in burglaries in recent years, the reality is it remains all too common in Ireland. By examining the figures over an extended period we can see the true scale and impact of burglary in Ireland.

“The good news is that our research also shows Irish householders are taking more steps in recent years to protect their homes, including the installation of monitored alarm systems. A PhoneWatch home is four times safer than the national average and we are proud that we now protect almost 110,000 homes and small business in Ireland.”

In total 245,260 burglaries occurred in Ireland between January 2009 and December 2018. While there were significant variations year-on-year, 2018 saw the lowest number of burglaries for the decade (16,969). Data for the first three months of 2019 shows the decline continuing with 4,226 burglaries recorded in the first 3 months of this year a 4.6% drop.

Dublin accounted for 41% of all burglaries in the country over the past decade, meaning it suffers from both the highest burglary volume (102,555) and highest burglary rate (19.97%)*, equivalent to 1 in 5 premises in the county. Dublin was followed by the commuter counties of Louth, Kildare and Wicklow respectively.

Kerry showed the lowest burglary levels, with a rate almost 4 times lower than Dublin and the commuter counties, the equivalent of 1 in 19 properties and was followed closely by Donegal and Mayo. Cork, despite a large urban population, has been the fourth safest county in terms of burglary rate with the equivalent of just 1 in every 16 premises being burgled. (Full breakdown below) 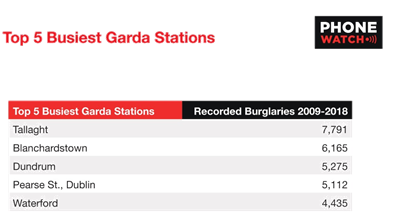 Tallaght Garda Station recorded the most burglaries of any of Ireland’s 550 Garda stations nationwide. While recording 7,791 burglaries placed it significantly ahead of any other station, it also recorded the largest fall over the ten years analysed, with a 58% decrease since 2009.

Four of the five busiest Garda stations were in Dublin, with the fifth being Waterford. The quietest station in the country was Glenamoy, Mayo with just six burglaries reported.

The Garda stations which recorded the highest increases in the number of recorded burglaries between 2009 and 2018 were Rathcoole, Skerries, and Santry in Dublin followed by Mayfield, Cork. The quietest Garda stations for burglary were concentrated in the west of the country, with Glenamoy in Mayo, Roundstone in Galway, and Barraduff in Kerry recording less than one burglary each year on average.

While the darker months have shown higher levels of burglary for many years, this has become a more pronounced trend in recent times. Over the past decade, the research shows that when the clocks go back, until they go forward again, burglary rates have been 31% higher.

Overall, November is the highest month for burglary for many years, accounting for 11% of break-ins on average. In most recent years, there has been a rise in burglaries in January and February, with burglaries during these two months almost doubling over the past decade (+92%).

The impact of burglary

PhoneWatch also commissioned research on the impact of burglary on homeowners. Of those surveyed, 52% felt the worst impact of a burglary is the idea of a stranger being in their home, significantly ahead of the loss of possessions at 29%. This sentiment is echoed by those who have been burgled, with 80% saying the lasting impact has been a heightened awareness of strangers in their area.

Burglary is also an event which many homeowners fear, ranking alongside losing one’s job, or getting into financial difficulty, in terms of perceived impact.

When it comes to possessions, it’s the personal items such as heirlooms (23%) or photos (21%) we fear losing the most. Of more replaceable items, over 20% are concerned about their car keys and 9% about credit cards.

There is positive news in how people are improving their home protection over the past decade. Today, 49% of Irish homes have an alarm. There has been a considerable increase in the number of people opting for a monitored alarm system. 36% of alarms are now monitored by a professional 24/7 service for added peace of mind.

PhoneWatch, Ireland’s leading provider of monitored burglar and smoke alarms, has seen a 44% growth in customer numbers over the past 10 years, and now protects 109,500 Irish homes. Research shows that a monitored home is 4 times safer than the average, making a monitored alarm one of the most effective deterrents available.

While we are being smarter about our protection, there are still simple errors people are making when it comes to home security. 41% of people admit to having left windows open while away, 38% will leave keys outside.

Eoin Dunne of PhoneWatch commented ‘while it’s very encouraging to see Irish homeowners investing in their home security, it’s worrying to see that we’re still forgetting the basics when it comes to our security. Burglary is predominantly an opportunistic crime, so leaving windows open, or keys where they can be found are mistakes that can be easily avoided. It’s the simple precautions which are often the most effective in protecting our homes.’

The research clearly shows that overall, we’re getting better at protecting our homes, and these added steps are having an impact with a welcome fall in burglaries. Ultimately, the safety of our homes is in our hands, with the research showing that taking additional precautions can make a significant difference. For additional home safety tips, visit PhoneWatch.ie

Father Of Irish Man Facing Deportation From US Speaks Out