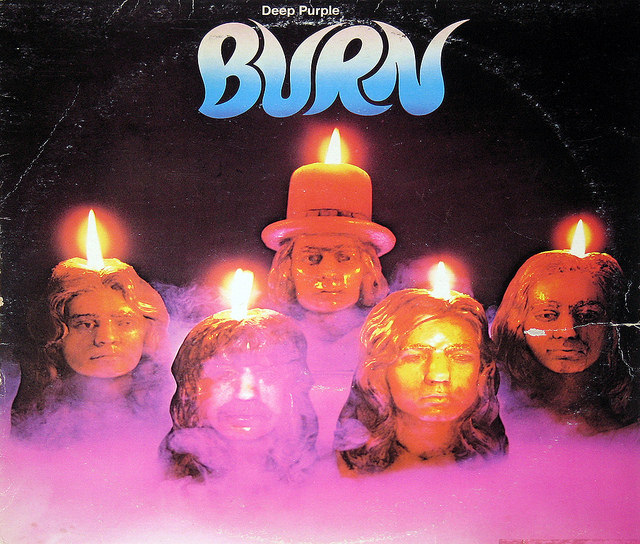 Burn is the eight studio album by Deep Purple and it was released on the 15th of Feburary 1974. It was released shortly after two band members decided to leave the band.

Although it shook the band’s fan base to its core, the acrimonious departure of vocalist Ian Gillen and bassist Roger Glover served to rejuvenate Deep Purple in time for 1973’s aptly named Burn album, which unquestionably showed huge improvement over their lackluster previous effort, Who Do We Think We Are.

In an interesting twist rarely attempted before or since, new recruits David Coverdale (vocals) and Glen Hughes(bass and vocals, ex-Trapeze) traded lead singing duties on virtually every one of its songs — an enviable tag team, as both possessed exceptional pipes. The phenomenal title track started things off at full throttle, actually challenging the seminal ‘Highway Star’ for the honor of best opener to any Deep Purple album, while showcasing the always impressive drumming of Ian Paice.

Up next, the intro to the equally timeless ‘Might Just Take Your Life’,  however simple from a technical perspective, remains one of organist Jon Lord’s signature moments; and the downright nasty ‘Lay Down, Stay Dow’ roared behind wildly careening starts and stops and a fantastic Ricthie Blakcmore guitar solo which left no doubt as to who was the band’s primal force, regardless of lineup.

Moving right along, though it was rarely included in later-day greatest hits sets, ‘What’s Going on Here’ was about as good a single as Purple ever wrote; ‘You Fool No One’ was compelling for its sheer intensity; and the funky ‘Sail Away’ was a sign of the band’s direction in years to come.

Lastly, the fantastic slow-boiling blues of ‘Mistreated’ closed the album proper (let’s ignore the record’s only throw-away track — boring final instrumental ‘A 200’) with a command solo performance from Coverdale, as nuanced and sensitive as it was devastating.

So impassioned was the singer’s delivery, in fact, that the song would remain his personal, in-concert trademark with Whitesnake, long after his tenure with Deep Purple came to a close. Like the vast majority of Burn this song’s greatness qualifies it for the highest echelons of hard rock achievement, and therefore ranks as an essential item in the discography of any self-respecting music fan.

The Police – Ghost In the Machine

The Classic Album at Midnight – Supertramp’s Even in the Quietest...