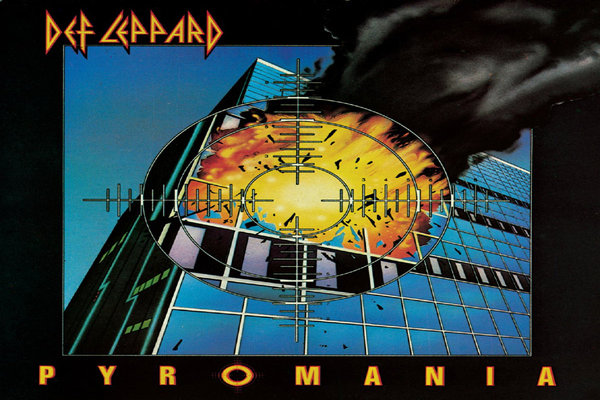 Pyromania is the third studio album by English rock band Def Leppard released on 20 January 1983. It featured new guitarist Phil Collen and was produced by Robert John ‘Mutt’ Lang. The album charted at No. 2 on the Billboard 200 and No. 18 on the Uk Albums Charts.

The album took a year to record and had to sell 1 million copies just to break even. But Def Leppard’s 1983 chart torcher Pyromania was worth the time and expense. It sold more than 9 million copies and, with its radio-ready blend of melodic savvy and stadium wallop, defined the mainstream metal sound of the Eighties.

Lange and the Leppards worked for months on riffs and choruses, trying different combinations and then sewing them up when they made melodic and commercial sense. But the writing wasn’t all so academic. “Photograph” was a song with a good chorus, a hot bridge but a flabby verse riff until guitarist Steve Clark started noodling around on his guitar one night while the rest of the band was watching World Cup soccer.

“The announcer suddenly got quiet,” Elliott said, “and we heard this guitar blasting from the room next door. It sounded great, so we got up and ran over to see what was going on. Steve sat there beaming, saying, ‘I fixed it.’ And that was it. ‘Photograph’ was born.”

Pyromania was a hard-rock temple built brick by brick. To get a sound that combined metal muscle with studio precision, Lange recorded each member of the band individually, starting with bassist Rick Savage. A single guitar riff overdubbed with clean harmonies, funky distortion and screaming feedback might take up to three weeks to record, often one string at a time. When the band members later went to do background vocals, they discovered all of the guitars were slightly out of tune. It was too late to re-record them, so the guitars were put through an electronic harmonizer to cover up the bum notes.

Lange’s obsessiveness with the smallest sonic details had a big downside: It was hard to tell, from day to day, whether any progress at all was being made on the record. After an all-night session, Lange would often play work tapes for Leppard co manager Peter Mensch, who lived a short drive from Battery Studios. “Mutt would come in and say, ‘Listen to what we did tonight’ — and three more words would be added to a vocal,” says Mensch. “It got to a point where I’d keep listening to these tapes and I couldn’t tell what was there and what was missing.”

There were personal complications, too. Founding rhythm guitarist Pete Willis was fired midway through the sessions because of a debilitating alcohol problem; within forty-eight hours, his replacement, Phil Collen of the London glam-rock band Girl, had cut the solo for “Stagefright.”