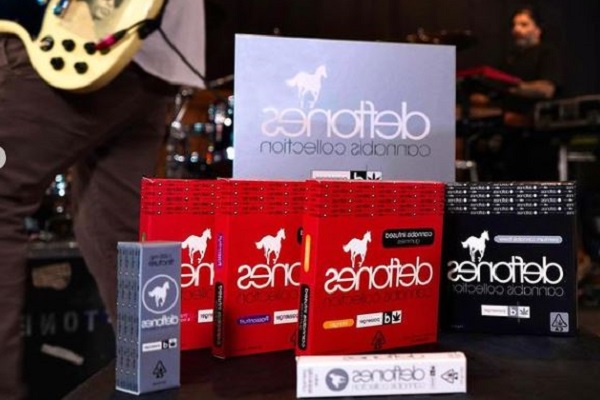 American alternative metal band, Deftones, have just announced the launch of their very own line of marijuana products. Having already offered fans branded beer and tequila, the Sacramento rockers are moving onto buds, edible gummies, and disposable vapes.

Taking to social media to announce their first foray into the world of shmoke, the band said it has been an “ongoing mission” to provide Deftones fans with quality products, “throughout our career”.

“Whether it’s music, beer, or tequila, we put in the time, care and effort to make sure we’re delivering merchandise to the market that has been thoroughly scrutinised by all of us. The obvious next step in this progression is cannabis,” Deftones wrote on their Instagram page.

Cannabis sold by the band is being produced through a partnership with Golden Barn, a California-based company which produces CO2-extracted cannabis. In reference to Deftones White Pony track, Passenger, the first edition of the line comes packaged within The Passenger Box. The box can be seen branded with the pony from the album artwork.

Taking to Instagram, an overview of The Passenger Box is provided by Deftones guitarist, Stephen Carpenter – take a look below. You can check out @DeftonesCannabis on Instagram for updates on its availability.

In response to the latest foray, fans have been generally positive towards an official Deftones branded weed on the market. Thanking the heavens, one fan was glad to see the band did not choose to go down the NFT path.

“The weed probably has a ‘lil bit to do with his conspiracies and this and that… sitting at home, just looking on whatever sites he looks at. Probably doesn’t help being smoked out,” Moreno stated.