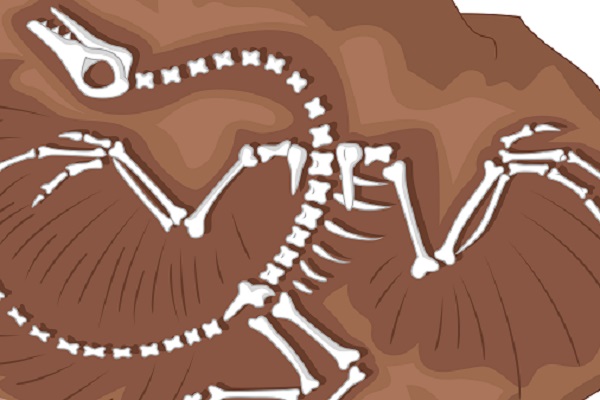 Scientists have identified the species of bones belonging to a “chicken-sized” dinosaur, discovered in Brazil in 1995. The team stumbled upon the identity of the species, while examining the fossils held at a natural history museum in Karlsruhe, Germany.

It is named Ubirajara jubatus and it is the first dinosaur, with feathers, ever discovered in the Southern Hemisphere. The carnivore lived 110 million years ago and is said to have had dazzling peacock-like plumage, yellow and brown fur and long needles sticking out of its shoulders, with colourful plumage.

When the bones were first discovered, scientists missed evidence of hidden skeletal elements and soft tissue. However, researchers in the State Museum of Natural History Karlsruhe were able to build a clearer picture of Ubirajara in life, thanks to new x-ray scans.

In their report, the team suggest it probably used its unusual shoulder feathers and mane for display purposes to attract mates and ward off rivals. It can be seen in the name, Ubirajara which means lord of the spear and comes from the local Tupi Indigenous language, while jubatus comes from the Latin for maned or crested.

Professor David Martill, of the University of Portsmouth, and co-lead author said the dinosaur “dressed to impress” – and performed “bird of paradise” displays.

“What is especially unusual about the beast is the presence of two very long, probably stiff ribbons on either side of its shoulders,” he added. “They were probably used for display, for mate attraction, inter-male rivalry or to frighten off foe.”

Professor Martill said that although they cannot prove the “specimen” was male, it appears likely. He said this is “surprising, given most complex display abilities are reserved for mature adult males.”

“Given its flamboyance, we can imagine that the dinosaur may have indulged in elaborate dancing to show off its display structures.”

Modern birds are famed for their elaborate plumage and displays used to attract mates. Professor Martill said the peacock’s tail and male birds-of-paradise are “textbook examples” of this.

“Ubirajara shows us that this tendency to show off is not a uniquely avian characteristic, but something that birds inherited from their dinosaur ancestors.’

The species lived around 110 million years ago, during the Cretaceous period. It is closely related to the European dinosaur Compsognathus that roamed Earth much earlier, in the Jurassic.